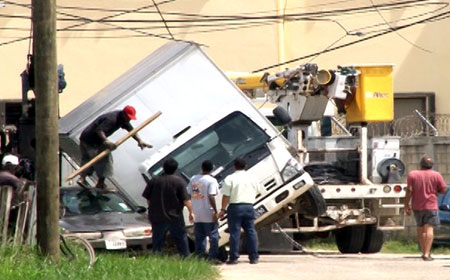 BELIZE CITY–Traffic was interrupted for several hours this morning on Evergreen Street, which is located behind the headquarters of Belize Water Services (BWS), after a delivery truck tore down a power line and a lamppost during the height of rush hour traffic.

Eyewitnesses said that sometime after 8:00 a.m., a white delivery truck, belonging to Grace Kennedy (Belize) Limited, was traveling on the street when the top portion got entangled in some low-lying power lines, which were hanging across the street.

The truck driver, who was apparently unaware of the situation, continued on his journey; however, the entanglement flipped the vehicle on its side and caused it to lean to its right on two wheels on top of a grey Saturn car which is owned by an employee of BWS, and which was parked on the street side.

Fortunately, no one was injured, and Belize Electricity Limited (BEL) workmen went to the scene shortly afterward in order to commence repair works on the fallen lines and broken lamppost.

While traffic officers who also went to the scene mentioned that they had informed the police’s Traffic Department of the mishap, we understand that no report of the incident had been filed.