Deon gets on scorecard 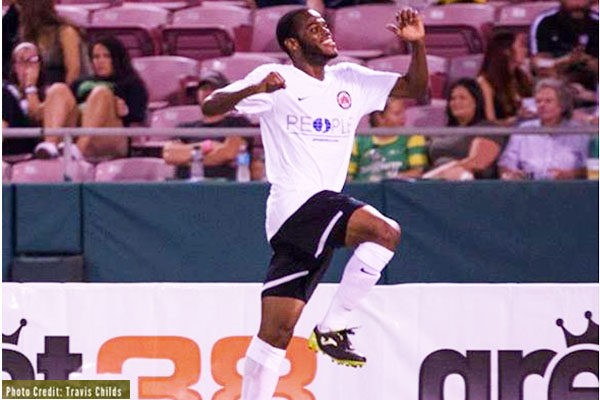 Deon gets on scorecard in NASL; Silverbacks win, 3-1, over Tampa Bay Rowdies

In their third outing of the North American Soccer League (NASL) 2014 season, the Atlanta Silverbacks finally garnered their first 3 points of the competition, when they defeated the Tampa Bay Rowdies in Tampa this past Saturday, April 26, by a 3-1 score; and our own Deon McCaulay registered his first NASL goal.

Their season opener was a disappointment a couple weeks ago on Sunday, April 13, when Belize City fans at the MCC watched on a wide-screen T.V. as defending NASL champions New York Cosmos delivered a 4-0 beating to the visiting Silverbacks. Deon played well but didn’t score. He had scored 4 goals in pre-season matches, but he would have to wait a while in the official regular season to remember the feel of shaking the net. In their second game, the Silverbacks lost at home, 2-1, to the San Antonio Scorpions on Saturday, April 19; and again Deon was scoreless.

The draught finally ended for Deon on Saturday night, April 26, when he scored his team’s third goal at the 51st minute in a 3-1 road win over the Tampa Bay Rowdies at the Al Lang Stadium in St. Petersburg, Florida.

Their next outing will be at home at the Atlanta Silverbacks Park this Saturday, May 3, against the Ottawa Fury FC. Right on, Deon!