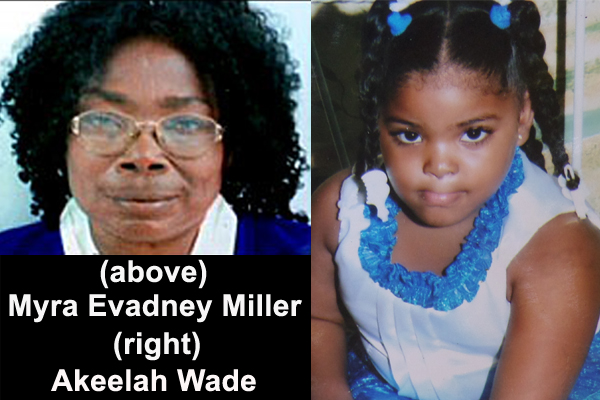 Easter 2014 did not bring peace and joy to five separate families from different parts of the Jewel, who are instead mourning the death of their loved ones.

On Good Friday morning, Myra Evadney Miller, 68, of Boston Village, was found beaten in the head and lying on the floor in her bedroom. She was rushed to the Karl Heusner Memorial Hospital, where she died on Easter Sunday.

The neighbors said that they became concerned after not seeing Miller on Holy Thursday, and on Friday went to her house to find out what was happening; that was when they found that her house had been broken into through a window at the rear of the house.
Reports are that Miller, a diabetic, was found badly hurt and barely conscious. She was taken to the Karl Heusner Memorial Hospital, where doctors worked to help her, but on Easter Sunday, she died due to the injuries.

Police have detained a suspect in connection with the murder.

Myra Miller had been living in Boston for over 15 years.

On the same day that Miller was found injured in her home – Good Friday, April 18 – Lloyd Savery, 91, of the Sarawee area at Mile 5 on the Stann Creek Valley Road, died in a road collision at about 6:30 in the evening. Reports to Amandala are that Savery was walking on the side of the road from Dangriga towards Pomona when arriving at about Mile 5 on the Valley Road, a vehicle travelling in the same direction knocked him down from behind.

Savery suffered massive head and body injuries and died almost immediately. He was taken to the Southern Regional Hospital in Dangriga, where he was declared dead on arrival. His body was brought to the morgue at the Karl Heusner Memorial Hospital, where it awaits a post-mortem to certify the cause of death.

Police have issued the driver of the vehicle, Byron Guzman, a Notice of Intended Prosecution (NIP).

Guzman told police that the high beam from oncoming vehicles blinded him, causing him not to see momentarily. He unfortunately drove to the side of the road where Savery was walking, and knocked him down.

At about 11:30 Holy Saturday morning, Arcencio Landero was in a canoe on the Macal River, crossing to the other side in Esperanza to go home, when the boat overturned, and he went under and failed to resurface.

Travelling with Landero at the time was his wife, who swam safely to the bank of the river and waited for him to resurface. The alarm was raised when he didn’t emerge from the water, and family members quickly ran to the river where they conducted a quick search, and his brother found him at the bottom of the river.

Police took the body to the San Ignacio Hospital, where it was declared dead on arrival.

Tito Landero, Arcencio’s younger brother, told Amandala that Arcencio and his wife had gone to Santa Elena to buy groceries for the family, during which time he met friends, who gave him drinks. He and his wife were returning home in the canoe and were crossing the river to their house, which is across the river, when the boat overturned.

Tito said that his brother was hard-working and loved his family. His brother is the father of four children, two boys and two girls.

Tito said that Arcencio and their family are from Billy White, located between Santa Familia and Spanish Lookout, and that Arcencio will be buried there.

The fourth fatality occurred on the same day at about 2:30 Holy Saturday afternoon. Honduran Santos Delcid Amaya, 34, a resident of Bella Vista who was reportedly intoxicated, went to swim in the Swasey River in the area of Bella Vista, and did not resurface.

He was later found floating face up at about 3:30 that same afternoon in the Swasey River about 1 ½ miles behind Red Bank in the Stann Creek District. The body was taken to the Southern Regional Hospital, where it was declared dead on arrival.

Police reported that no signs of violence were observed on the body.

The fifth life claimed in the Holy Week is that of Akeelah Wade, 5, who lost her life in an accident at about 4:00 that same Holy Saturday afternoon. Wade was with her 15-year-old sister and her sister-in-law, Vishiana Carcamo, 19, who lives on Fabers Road.
The three of them were traveling on a motorcycle on Douglas Jones Street towards Belchina Bridge, when on their arrival at the junction of North Front Street and Douglas Jones Street, Carcamo, who was driving the cycle, lost control and the bike slammed into the left side of a city bus, near the rear wheel.
The bus was travelling up North Front Street towards the Swing Bridge. The impact hurled the child against the bus, and she landed on the pavement, causing her to suffer massive head and body injuries.

The driver of the city bus, Eyon Anthony Bermudez, 44, of Police Street, told police that he was driving the bus from Mapp Street on North Front Street towards the Swing Bridge, and upon reaching the junction on Douglas Jones Street, a red Honda 125 Elite scooter, L/Plate MC-2507, slammed into the rear of his bus.

Akeelah was rushed to the KHMH, where she died shortly after. Her sister suffered injuries to her knees and head, and she was treated and later released, but Vishiana Carcamo was admitted to ward in a stable condition, with multiple injuries, including a dislocated shoulder.

Carcamo was later released from the KHMH, but she was rushed back to the hospital because she still was in severe pain. She is presently recovering at the hospital.

Cynthia Meighan, Akeelah’s adopted mother, said that her two daughters and her daughter-in-law were traveling home on a scooter after swimming in the pool at the Princess Hotel compound.

In remembering Akeelah, the grieving mother became emotional and tears began to flow from her eyes.

Akeela’s funeral is to be held on Thursday evening at the Kings Park Nazarene Church here in Belize City. Akeelah will be buried at the Lord Ridge Cemetery following funeral services at 2 p.m.