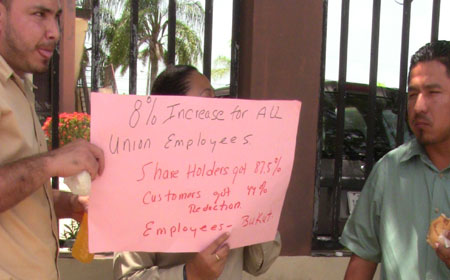 BELIZE CITY, Thurs. July 23, 2015–Unionized workers of the Belize Electricity Limited (BEL) and management of the company met separately with Labour Minister Godwin Hulse in Belmopan today, after the Minister reached out to the union on Wednesday, on the third day of its protest in front of the company’s Belize City headquarters over preconditions which the union claims it cannot accept for a salary increase which they say they unconditionally deserve.

The Belize Energy Workers Union (BEWU), on the one hand, and the management of BEL, on the other hand, have both provided disparate data on the proposals for the wage increase, as well as what workers have actually gotten in salary increases in previous years. The picketing came after talks, which began last November, broke down.

“We can’t have a situation where we are not talking. It’s one company, one of Belize’s stellar companies, and they are all Belizeans at that table; and so we have to talk so we move the process forward,” Hulse said.

Minister Hulse confirmed to our newspaper this evening that he has met with both sides, management this morning and the union this afternoon, in an attempt to clearly understand their positions, so that he could determine where they diverge and to try to establish where there is common ground.

Hulse said that three weeks ago, he had appointed the then Labour Commissioner, Ivan Williams, as mediator, but he observed that the union began its midday picketing parade this week.

“I felt it necessary to arrest the situation and get them back to the table,” the Minister added.

Our attempt to get feedback from BEL’s management on today’s meeting was unsuccessful, as we were told that the spokesperson was unavailable and out of office.

However, we did receive an update this evening from the union’s general secretary, Marvin Mora, who said that the meeting between their executive and the minister provided them with a good opportunity to make an open and frank presentation, and he hopes that his effort to bridge a gap between the union and management of the company, will pay some dividends.

“What the union wants to do is to ensure that all parties are satisfied,” said Mora, who added that “…the union is not trying to superimpose on customers and shareholders, but trying to work within the lines set.”

He reaffirmed that the major reason for the impasse between the union and the company is the preconditions which the company wants to set for the salary increase.

In a press release issued this Monday, BEL affirmed its demand for an adjustment to the policy governing sick day benefits in order to include a requirement that employees produce a medical certificate for 1-day absence due to illness and a return to the vesting period after which workers can collect 100% benefits for the pension fund from 7 years to 15 years (which was the original timeline under the management of Fortis, before the Government of Belize nationalized the company).

“The condition regarding sick days is because the Company is of the view that the BEWU misused the existing benefit to stage the sickout. Therefore BEL is proposing to close that loophole,” the company said.

On the matter of the vesting period, it was stated, “The Fortis executive management team, along with the BEWU, changed the period from 15 years to 7 years in June 2011 without the approval of BEL’s board of directors – the day before the Government takeover of BEL.”

As for those preconditions which are a source of impasse between BEL’s management and the union, Hulse said, “I am confident they will be settled.”

In his view, the parties (BEL’s management and workers) are “not wide apart;” and he was confident that their differences can be amicably resolved in the days ahead.

He said that they have set a tentative timetable, and the next step is for the Deputy Labour Commissioner, Paulette Wagner (who we understand is “holding the fort” since Williams has gone off into retirement), the CEO in the Ministry, and the Minister to meet again with BEL’s management either tomorrow, Friday, or Monday to discuss the issues. He said that they have promised to get back to the union on Tuesday.

Meanwhile, the BEWU plans to hold an executive meeting Friday morning to further discuss the matter, and a general membership meeting on a future date.