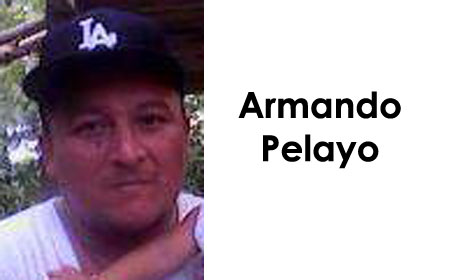 COROZAL TOWN, Corozal District, Thurs. Dec. 8, 2016–Speculations are that a Corozal man was awakened from his slumber by a chop in his forehead, and when he tried to shield his face, he was chopped multiple times on his hands and back.

Even with those machete-inflicted wounds, however, Armando Pelayo, Jr., 36, refused to die, and was thereafter shot in the back at close range with a 9mm gun.

Corozal police have not yet confirmed that the victim was chopped first and then shot, but they did confirm that he had been shot and chopped.

According to Corozal police, the incident occurred sometime around 2 a.m. today, Thursday, when the victim was home alone with his 20-year-old common-law wife in their G-Street home in Corozal Town.

Cops seek his common-law wife, a Guatemalan, “for questioning” in the shooting/chopping murder

The two infant children of the couple were not present at the time of the incident. Police also revealed that there was no sign of forced entry into the green concrete flat, which is situated in a fenced yard.

In an interview with the press, police revealed that they were on patrol and began to follow a heavily tinted white Toyota Camry with American license plates.

According to them, the vehicle led them to the victim’s home, and one of Pelayo’s neighbors called out for help and that was when they saw Pelayo bleeding profusely.

The badly injured man had reportedly run outside his house seeking help before he collapsed on the street.

While attending to Pelayo, police watched as the occupants of the white Camry, a man and a woman, exited and guided the victim’s tearful common-law wife into the vehicle.

They then sped off and so did police, who rushed the heavily bleeding man to the Corozal Hospital, where he succumbed to his injuries on arrival.

Police told us that when they visited the crime scene, they recovered a knife, a machete, 3 live 9mm rounds, one expended shell and one slug. However, police are yet to confirm if Pelayo was killed by his own gun.

While police have not yet revealed the motive for Pelayo’s brutal murder, they have confirmed that around 11 p.m. on Wednesday night, they received calls that he had been behaving in a disorderly fashion at a business place, but when they arrived, he had already left.

Four days ago, police said, they had responded to calls which reported that Pelayo was in an altercation with a man whom he punched in the face. However, police have not provided further details.

According to a resident of G Street, whose home is situated a stone’s throw away from the victim’s home, almost a week ago, Pelayo physically abused his wife.

The couple’s relationship was one marked by domestic abuse, we were told by neighbors, but police did not reveal this detail.

Furthermore, Pelayo allegedly had physically abused the mother of his common-law wife and had been remanded to prison until four months ago. Pelayo’s common-law wife is of Guatemalan heritage and was one of the occupants in the white vehicle, according to neighbors.

Corozal police have confirmed that Pelayo had been in prison, but they did not reveal why.

No one has yet been detained for one of Corozal’s most ruthless murders to date, but police told us that they are seeking Pelayo’s common-law wife and the occupants of the white car for assistance with their investigations.

When asked if the victim’s common-law wife was a suspect, Corozal police told Amandala that they are unable to say.

Anyone with information as to the whereabouts of Pelayo’s common-law wife, or the occupants of the white vehicle, is urged to contact police.