Dr. Errol Elrington on the run for 4 years now 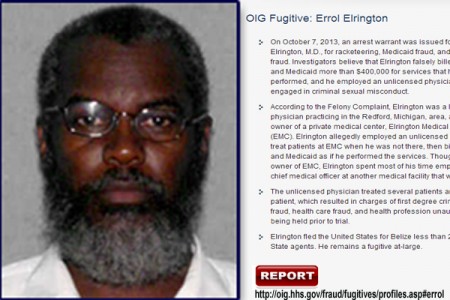 BELIZE CITY, Sat. Feb. 11, 2017–Dr. Errol Elrington, a younger brother of Minister Wilfred Sedi Elrington, has been on the run for four years now. He has been wanted by authorities in the United States since October 7, 2013, when an arrest warrant was issued for him in relation to racketeering, Medicaid fraud and health care fraud.

Elrington fled the US less than a day later.

According to the US Office of the Inspector General, investigators believe that Elrington falsely billed Medicare and Medicaid more than $400,000 for services that he never performed.
Additionally, he employed an unlicensed physician who purportedly engaged in criminal sexual misconduct.

The Felony Complaint alleged that Elrington was a licensed physician practicing in Redford, Michigan, and was the owner of a private medical center, Elrington Medical Center (EMC).
There, he allegedly employed an unlicensed physician to treat patients at EMC when he was not there, then billed Medicare and Medicaid as if he performed the services.

When this news broke, Prime Minister Dean Barrow told the media that he would cooperate if the US had requested that Elrington be extradited.

Elrington’s brother, Hubert Elrington, had told the media that his brother did nothing wrong, except to hire the wrong person.

At this time, we are unable to confirm where the wanted man is located.