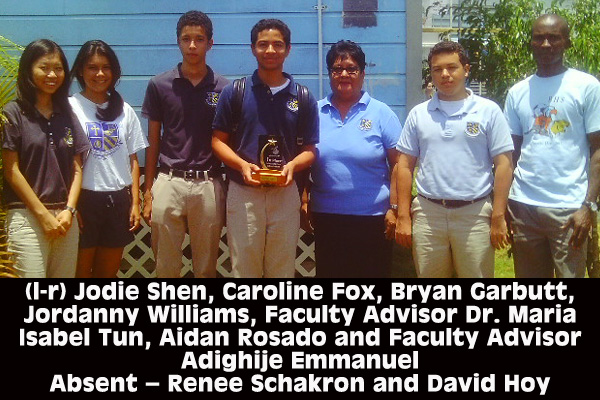 While the oil drilling issue rages on in southern Belize between the Sarstoon-Temash Institute for Indigenous Management (SATIIM) and the oil exploration company US Capital Energy (Belize) Ltd. regarding the right to conduct oil exploration activities within the Sarstoon-Temash National Park, high schoolers from across the country were engaged in the first ever National Secondary School Oil Debate competition which concluded last Wednesday at the Bliss Center for the Performing Arts.

The competition, which was organized by the Belize Coalition to Save Our Natural Heritage, started back in November of 2013, and the goal of the competition was to encourage discussion and research on oil exploration in Belize.

The participating high schools who were enlisted took part in a series of debates concerning the merits and disadvantages of oil exploration, and in the end, the Belize High School debate team from Belize City won over Julian Cho High School from Toledo after over 40 minutes of constant debating.

Today, Amandala caught up with some of the students from the 5-member Belize High School team, and team leader Jordanny Williams, told us that although it took a lot of hard work and dedication to come out on top, it was worth the while, especially since they learned a lot about the local and international oil industry while preparing for the debate.

Williams explained, “We took part in 3 debates and the final one was based on whether or not Belize’s offshore and protected areas should be legally declared as off-limits to oil and gas exploration. We argued in favor of oil exploration and the basis of our argument is that we were actually exploring and not drilling – which is a common misconception – and if we explore then we can know if we should venture further into drilling which would provide many economical benefits and the revenue that would be generated from it would be huge as well.”

Williams stated that they were able to secure the victory because they were organized and presented their points in an orderly fashion, but also because they did a lot of research and spent countless hours studying their material.

“The points that we argued were thought-provoking and I believe the judges were able to see where we were coming from and why the initiative would be beneficial to our country”, he explained.

Team member and 4th former Aidan Rosado was the opening speaker for his team. He said that his argument was based on the notion that Belize is lacking profitable industries and an oil industry would be able to fill that gap.

“We did a lot of individual research, even over the Easter break, and then we compiled our knowledge and information together. I think we were able to win because we delivered on our points and we relied on strictly facts”, Rosado noted.

Education Outreach Officer for the Belize Coalition to Save our Natural Heritage, Judy Waight, told Amandala that the teams were each given one month to prepare and they were assessed according to the quality of their content, delivery and rebuttals.

She mentioned that the debate was aimed at rousing more discussion on issues pertaining to the oil industry in Belize and gave the high school students an opportunity to learn more about what’s happening within that industry, especially since it happens to be a current hot-button issue.

The first-place prize given to the Belize High School debate team is a trip to Half Moon Caye.