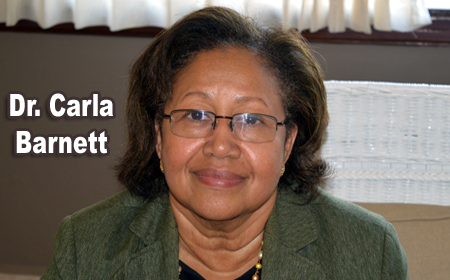 BELIZE CITY, Thurs. Feb. 9, 2017–The national budget is due to be presented to Parliament in a few weeks, and whereas a draft budget book has not been prepared, preliminary figures for the $1.2 billion budget were tabled today at the first external consultation held by the Ministry of Finance for this budget cycle.

This afternoon, government officials met at the Best Western Belize Biltmore Plaza in Belize City with members of the business community, and they are due to meet tomorrow at the same venue with representatives of the National Trade Union Congress of Belize (NTUCB).

Hon. Dr. Carla Barnett, Minister of State in the Ministry of Finance, told Amandala after today’s consultation with the Belize Chamber of Commerce and Industry (BCCI) and the Belize Business Bureau (BBB) that the presentation “…focused on our analysis of the economy; our analysis of the government’s fiscal performance; what we need to be trying to achieve in the next fiscal year. And we sat down with the business community to get their ideas firstly on how the present economic context affects them and also any suggestions that they may have in terms of revenue and expenditure measures.”

At the outset of its presentation today, the Ministry of Finance described Belize’s economy as “imperiled,” as “Belize has been hit by two years of exceptionally poor economic conditions.” What that has meant for the business community—and particularly Belize’s productive sector—is plummeting export earnings as well as a reduction in foreign reserves, needed to pay for purchases which the wider business community makes overseas.

“We finally have an official acceptance that we are on the precipice of serious economic meltdown,” said Arturo Lizarraga, BBB’s president. 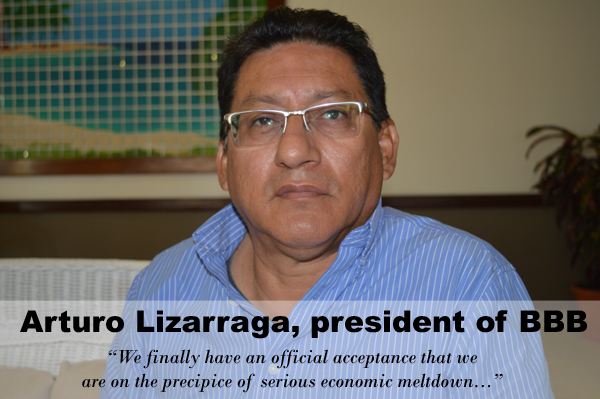 The Ministry of Finance went on to concede that “intervention in key companies has put pressure on public finances”—and by that, it meant the nationalization of two major utility providers: the Belize Telemedia Limited (BTL) and the Belize Electricity Limited (BEL). Beyond that, the Government Belize is still under pressure to pay the remaining US$100 million to settle payment for BTL, and “GOB continues to contest various legacy claims totaling in excess of BZ$200 million (US$100 million)…. related to BTL, the Belize Bank and others,” the officials revealed today.

The presentation turned next to the recent economic performance, pointing to a shrinking economy, contracting by 1.5% in 2016, even as key productive sectors are “showing troubled outlooks.”

So what does this mean for the upcoming budget year? Although the economy is imperiled—as GOB has also told creditors who hold stake in the billion-dollar super-bond, which it is seeking to negotiate—it is clear from our interviews with representatives of the private sector that they are opposed to a hike in taxes under the current conditions. Furthermore, they point to tens of millions in uncollected tax arrears.

Lizarraga told Amandala that there was a suggestion from the business community for measures to raise revenue from cruise passengers and those monies, he said, should not go to the Belize Tourism Board or the terminal owners but to the Central Government. Furthermore, he said, since Belizeans pay a huge amount of money for visas to go to the United States, maybe tourists should pay $20 to $25 on landing here.

“We have a stake in what happens… there is only so much the private sector can continue to pay,” Lizarraga declared.

“There is clearly a pushback by the private sector not to pay [new] taxes…” he said, pointing to calls for the Government to implement internal controls.

Dr. Barnett confirmed that the Government had asked departments to scale back their budgets by about 5% as a part of the budget preparation process. She told us that in addition to the external consultations which the Ministry of Finance is now having with the social partners, they are also having internal consultations with government entities.

Lizarraga said that government has to demonstrate to the bond-holders that it is serious about “cutting the fat,” and the BBB supports a bill, as recommended by the International Monetary Fund (IMF) to implement a debt ceiling along with measures to reduce the national debt over time to sustainable levels.

He added, though, that there was still “no commitment [from the Government] to freeze the debt…. [and] no indication that they would trim the fat.”

The BBB president told us that there needs to be an additional discussion on growing the economy, and also creating new jobs.

“The Bureau’s side of the coin is, we don’t have that luxury. The crisis is already on us,” he said, adding that the Government has done a good job in not getting people angry about the current state of affairs, although “the numbers are there.”

We note that as things stand, Government’s preliminary budget has a gap of nearly $200 million.

Amandala also asked Dr. Barnett today about rumors that the Government will increase General Sales Tax (GST), but she told us that no such decision has been made. She later added that the Government intends to improve revenue administration before any consideration to increase taxes.

She told us that how the Government will propose to meet its budget targets will be determined after they finish both their internal and external consultations.

As for the outcome of this budget year, she told us that the Government will come in “a little bit below expectations,” and as for the wider economy, she confirmed that the recession persists.

We asked her about the prospects for the period ahead, and she told us that, “We are expecting that we are going to be doing better in some sectors…” Whereas she pointed to better sugar prices in the forecast, the concerns about the performance in the fisheries sector remain; as, she said, there is a bit of uncertainty on that front. Meanwhile, the prospects for tourism remain strong.

Overall, the Government is expecting that in 2017 they “will see the bottoming out of the recession,” and then maybe a very small increase in economic growth going forward, Barnett told us.

In concluding their presentation, the Ministry of Finance officials told the private sector that there is need for “fiscal consolidation”—increasing revenue and reducing spending—as well as structural reform—restoring the export sector and returning the country to a path of growth. It remains to be seen what final proposals will be put on the table to achieve these targets.