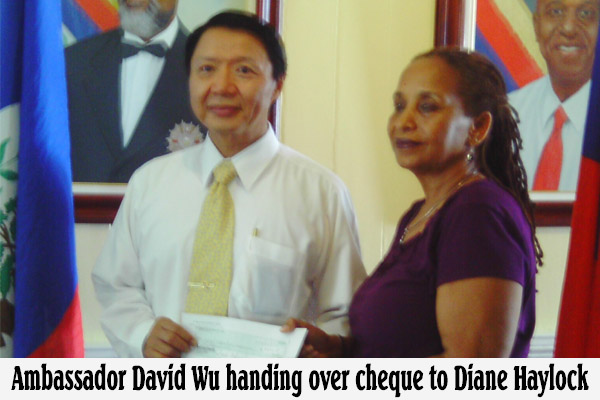 The Ambassador of China (Taiwan), His Excellency David Wu, this morning presented a grant to the National September Celebrations Committee to aid in the celebration of the 32nd anniversary of Belize’s Independence and the 215th anniversary of the Battle of St. George’s Caye.

The handing over ceremonies took place at the House of Culture, formerly the Government House, in Belize City. Diane Haylock, President of NICH, received the cheque of US$20,000 on behalf of the September Celebrations Committee.

She spoke to Amandala shortly after the ceremony, and noted that for quite a number of years, and particularly since she’s been co-chair of the National September Celebrations Committee, they have received a grant from the Embassy of Taiwan in Belize to facilitate the various activities that are carried out during the month of celebration.

“The embassy, in particular the ambassador, has always wanted to ensure that the resources that they share with us are used to promote cultural development and I think they understand the importance of our national September celebrations and therefore have been generous in making this contribution towards our efforts,” she said.

In terms of preparations for the September celebrations, she said, “The preparations have been going well. This has been a little challenging year for us because too often we find that we don’t have enough Saturdays in the month after we open up the celebrations and when we close at Independence, and when we don’t have enough Saturdays, it takes away from one of the Saturdays that we would normally have for different activities leading up to the main two days of the month, so there’s been some challenges around that.”

She went on to say, though, that preparations overall have been going rather well, and she predicted that “the hype will build up in a few days” because the celebrations programme is presently at the publishing house and should be available, at least online, in another week or so, so that “people can begin to see what the calendar offers across the country.”

According to Haylock, the theme of this year’s celebrations is ‘Belize and You, Belize in Me, Land of the Free’.