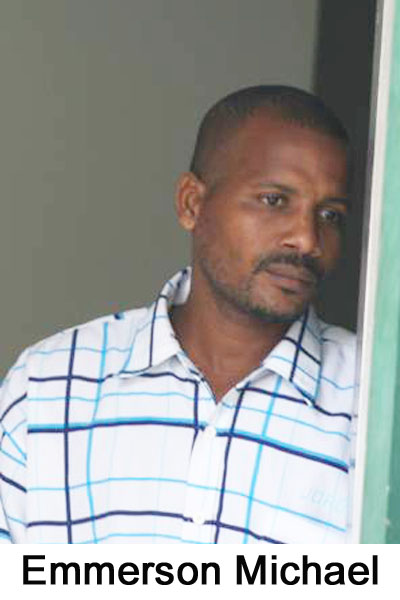 He, along with another soldier, were found in possession of 1,340 rounds of 5.56 ammunition

Sgt. Emmerson Michael, 34, an officer of the Belize Defence Force, was today found not guilty of keeping ammunition without a gun license – 1,340 live rounds of 5.56 ammunition.

According to a police report, at 8:30 p.m. on December 19, 2008, a green BDF Land Rover approached a police checkpoint that had been set up at the junction of Vista Del Mar and the Northern Highway. Driving the vehicle at the time was Sgt. Michael and in the passenger seat was Cpl. Henry Williams, another BDF officer.

When the vehicle reached the checkpoint, the driver was asked to pull the vehicle over to the side of the road. Sgt. Michael complied, and when the police came to the vehicle, they informed Cpl. Williams that they would conduct a search on him.

After searching Cpl. Williams, police then searched vehicle and they observed a blue and black colored knapsack on the floor of the vehicle on the passenger side. A further search of that bag led to the discovery of the ammunition. A search of the middle compartment that separates the driver and passenger seats also led to more ammunition being retrieved.

Stevannie Duncan, representing the Crown, argued that Sgt. Michael worked in tandem with Cpl. Williams in acquiring the ammunition, and smuggling it off the Price Barracks compound.

According to her timeline, it was clearly established how the duo carried out their plan of getting the ammunition and getting it off the compound. It started with Sgt. Michael being on “stand-by” duties from December 18, 2008, to December 23, 2008.

At 2:15 p.m. on Friday, December 19, 2008, Sgt. Michael sent a cell phone text message to another officer. That officer then called Sgt. Michael, who then asked him for the keys to Echelon (Echelon is the building on Price Barracks where the ammunition is held).

He was told that that officer didn’t have the keys and was then forwarded to another officer. After asking that other officer for the keys, he got them. At 5:00 p.m. the same day, Sgt. Michael and Cpl. Williams arrived at Echelon in the green BDF Land Rover, at which point Sgt. Michael told the officer at the gate that he was there to get ammunition because he was on standby duties.

At 5:20 p.m., the men exited the Echelon compound through the same gate they had entered. At 8:15 p.m., Sgt. Michael and Cpl. Williams then approached the guardroom, where only Cpl. Williams exited the vehicle and went to the guard, where he should have presented a ticket with the necessary information to leave the compound.

However, he did not have one, so when the form was filled out by the guard, it showed an unknown destination. The vehicle left the Price Barracks compound at 8:20 p.m., and Sgt. Michael drove from there en route to Belize City. The men approached the police checkpoint at 8:30 p.m., and that is when the bust was made.

However, even with that timeline set out for the jury, Duncan was unsuccessful in convincing the jury that Sgt. Michael worked in tandem with Cpl. Williams, or had any knowledge of the ammunition that were in the bag.

Although Sgt. Michael only gave a statement from the dock, it was enough to persuade the jury that he was innocent of the charge of keeping ammunition without a gun license.

If you are wondering what happened to Cpl. Williams, he was not on trial along with Sgt. Michael for the charge. In fact, he was not even called to testify for the prosecution. But because the vehicle was being driven by Sgt. Michael, the charge read “he and another, kept ammunition…”

Before the jury was allowed to go into the deliberation room, Justice Adolph Lucas, in his summation of the case, pointed out to them that although testimony was heard that Sgt. Michael visited Echelon to get ammunition, neither he nor Cpl. Williams were ever charged with theft or handling stolen goods. It was never proven that the bag of ammunition that was found in their possession was actually from Echelon or was the property of the BDF, he said.

So this evening, after the jury deliberated for just under four hours, they returned with the not guilty plea.

Amandala spoke with Sgt. Michael after the verdict and he told us that he is “not sure, after what the BDF has done to him, if he wants to continue working with them.” He went on further to say that they owe him back-pay for the four years that he has been on suspension, pending the outcome of this trial.

It is of note that during his statement from the dock, Sgt. Michael referred to a statement that was allegedly given by Cpl. Williams, claiming the ammunition to be his.

Amandala had a chance to read the statement, and in it, Cpl. Williams states that the ammunitions were his and that he was taking them to down to the city to turn them in under the “Amnesty Law” because he wanted to get money for them.