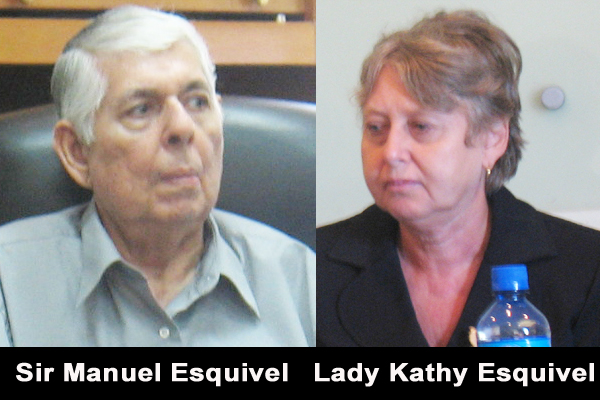 Sir Manuel Esquivel, KCMG, PC—the ex-Prime Minister who led the ruling United Democratic Party (UDP) to its first general elections victory in 1984 and the current finance advisor to Prime Minister Dean Barrow—has confirmed to Amandala that he has resigned from all his government appointments, and his wife, Mrs. Kathy Esquivel, has separately confirmed that she, too, has resigned from her prominent appointment as head of the National AIDS Commission—this on the heels of the abrupt departure of their daughter, Laura Esquivel-Frampton, from her position as head of the Belize Tourism Board (BTB), following a letter by 7 BTB managers to Tourism Minister Manuel Heredia, Jr., expressing a “vote of no confidence” in Esquivel-Frampton’s leadership.

On Thursday, March 13, the day after the BTB announced Esquivel-Frampton’s resignation, her mother resigned from the National AIDS Commission in Belize with immediate effect.

Sir Esquivel—who has been serving as one of PM Barrow’s finance advisors, as well as a government-appointed director of Belize Telemedia Limited and Belize Sugar Industries—has also announced his immediate resignation.

Esquivel first entered public life four decades ago, when he served at the Belize City Council. He told us today that he is now returning fully to his private enterprise, Price & Company Ltd.

Neither Sir Esquivel nor his wife would confirm to Amandala that their resignation was in protest of what transpired with their daughter last week. Sir Esquivel said that he would like to keep his and his daughter’s life separate. His wife told us that she resigned for personal reasons.

When we indicated that the timing of their resignations suggests that they are resigning in defense of their daughter, they responded by saying that that was our inference.

Some observers believe the grievance letter against Esquivel-Frampton was designed to push out the director of the BTB from the high-profile job because of a schism between her and the management team – others contend that it was engineered to make her a scapegoat for the financial quagmire being faced by the BTB, which is reportedly millions in the red.

As we reported in the weekend edition of Amandala, Esquivel-Frampton turned in a sick leave paper last week, but BTB issued a statement, announcing her resignation, while she was on sick leave. Notably, the BTB’s official press release lauded her performance as BTB director, despite the grievance letter filed against her by her management staff.

Esquivel-Frampton—who served two terms in Belize City as UDP councilor (2006-2012) and who was part of a group of 7 which was at odds with former Belize City mayor Zenaida Moya back in 2010—resigned right after that controversial letter was leaked to the media, catapulting the dispute into the public spotlight.

The upheaval at the BTB transpired while Prime Minister and Minister of Finance, Hon. Dean Barrow, was in St. Vincent and the Grenadines attending the 25th Inter-Sessional Meeting of the CARICOM Heads of Government.

Sir Esquivel, who is also listed on the UDP’s website as immediate past leader and Rules Committee Chair, told our newspaper that the Prime Minister only effectively returned to his office today, and he is awaiting Barrow’s reply.

Amandala tried to reach PM Barrow at his office today, but he did not return our call.

The departure of Sir Esquivel, who has played a key role in helping to stabilize both the electricity and sugar sectors, happens amid deliberations on the national budget in Parliament.

On top of the Esquivel catastrophe, Prime Minister Dean Barrow also returns from the CARICOM Heads of Government meeting to face a bold protest over the party convention held for Stann Creek West from one of the UDP’s chief propaganda strategists, Delroy Cuthkelvin, who has also served as the Prime Minister’s spokesperson. Cuthkelvin, who is alleging that organizers had blocked out legitimate voters, is not taking lightly his excruciating loss to former UDP minister Melvin Hulse, in the convention held yesterday, Sunday, in that division. Hulse reportedly secured 1,223 votes, while Cuthkelvin, who maintained that he did not mobilize voters because of his gripe with the convention, got 19 votes. (See story elsewhere in this edition of the Amandala.)