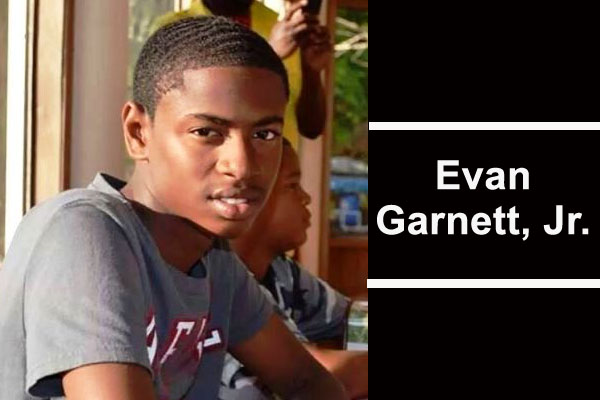 We gather here in great numbers to celebrate the life of Evan Rasheed Garnett — not because he was some visiting dignitary or big time statesman, but because of the young man he was and the grown man he was bound to be. We weep because we loved this youth – because his soul was pure and his heart was huge.

Evan Rasheed Garnett was a child born of love, delivered on a day of love – Valentine’s Day, 1995. He was 7 pounds 4 ounces – a healthy, happy baby. As a child he was a little fellow, scrawny even. But inside that wiry frame was packed a lot of love.

He loved his family and his family loved him back. This is a youth who was always infectiously happy – big beautiful grin alongside a radiant personality. Always polite almost to a fault – never one day called me anything other than uncle.

He was a real lover – of his parents, of girls, of life, of his siblings and his friends. Some of us might live to see three score and ten but may never quite have the same impact he crammed into his fleeting 19 years.

You’ve lionized him in painting, in music, in poems, on classroom blackboards, on T-shirts, on trucks and cars, on Facebook posts, in tattoos, and on designer nails. Your well-wishes, your calls, your thoughts, your presence made this extremely heavy load a little easier for our families to carry. You have soothed us in this our darkest moment.

It is written that death is the great equalizer – that kings die and beggars die. Rich men die and poor men die. The innocent and the guilty, they also die. But somehow when it is that the very young die we feel like a part of each of us has died – as if though something terribly unnatural has taken place.

To bury any family member is painful. But to bury a young lion in the prime of his youth, not yet 20, with a long, bright road ahead of him, kills. It absolutely kills. You may not have any idea just how much your efforts and your words have meant to my sister and our families.

Jacinta is a fabulously strong woman, but this has tested her in a way nothing else has before.

And yet her strength has been towering, inspiring even. It’s against the order of nature to bury our children. They should bury us, not the other way around. Yet, Jas, you’ve dealt with this with great grace, even when you’ve gotten angry or had questions we couldn’t answer. I’m proud to call you my big sister!

Over the last week, we’ve been regaled with many stories by Lee Evan’s friends — and parents of his friends. The stories document how much he meant to them — how he helped to make their young kids feel welcome in Los Lagos, how he epitomized what they wanted their sons to be, how fathers wept in front of their sons at the news that our boy had passed.

The truth is my sister had no idea how hugely popular and impactful her son’s life had been. To her, Evan was just her little boy, her firstborn, the child she at times had to speak to rough and plain. But he was her boy – her handsome, carefree little boy – and like any good mother, she wanted him to reach for the skies.

What we had in Evan was everybody’s dream of a son. And he was a son who was boastful of his father. There are very few sons, if any, who loved their father more.

One of the granduncles who were in the US Army recalled one day he was wearing his army boots to about here – some ways above the ankle. And a young Evan asked him: “Weh dat uncle?” So he told him it’s a boots that he uses to train in the jungle. So the young Evan said: “Cho, my pa have wahn boots weh deh way up yah,” signaling to a spot well above his knees.

Another time, they’re in a sports car that can go really, really fast. So the uncle says he’s pushing 70 miles; he’s really pushing it, or so he thought. The young Evan then blurts out: “this da the fastest you could go?” So the uncle pushes it a little harder, and you can practically feel the vehicle lurch forward. And the uncle feels he has really impressed the young buck now, but not so fast. Because Evan then says to him: “My pa have wahn car weh could go faster than this!” And at the time his father didn’t even have a car.

It’s an enduring love for his pops that he carried all his life, despite the momentary trials and tribulations that usually accompany family separation.

He spent many nights over the last few years at his dad. I suspect that on that fateful Saturday morning he opted to go to Los Lagos because it was Mother’s Day weekend and he wanted to be there with the leading lady in his life.

To his little sister Erin, he was her big brother. Her protector, her rock, the one who would come out in the rain in the middle of the night for her if she had a school fair and didn’t want to stay down in the City at her dad or at one of her uncles. He is irreplaceable, although younger brother Dmitri has already declared that he is the big brother now.

To his aunts and uncles and stepdad, he was sharp, funny, filled with energy and ideas to make money. The future was boundless, the possibilities endless. None of us at 19 could compare to him at 19 – none of us!

To his grandfather, he was someone to nurture and protect; he was our future, our bright shining star. Evan, Jr. was my dad’s eldest living grandson. Needless to say, the past week has been rough.
And I cannot begin to comprehend just how rough it must be for Ms. Netta, Evan’s paternal grandmother. She lost one grandson to cancer 20 months ago, and not long after that she was diagnosed with cancer herself – and now this. It hasn’t been an easy road for Ms. Netta these last couple years. This is a heavy cross to bear.

I read somewhere that we should not lose heart: “…Though outwardly we are wasting away…inwardly we are being renewed day by day. For our light and momentary troubles are achieving for us an eternal glory that far outweighs them all…So we fix our eyes not on what is seen, but on what is unseen, since what is seen is temporary, but what is unseen is eternal. For we know that if the earthly tent we live in is destroyed, we have a building from God, an eternal house in heaven, not built by human hands.”

We should not lose heart. Our boy tried to be a decent person; his heart was almost always in the right place. So I have no doubt that he is in a better place.

The old folks oftentimes hum along to Frank Sinatra’s “I did it my way,” but the young Evan can boast that in his fleeting time here on earth he did it his way. He loved life, and he was the life of the party. There was never going to be a dull moment if he was around.

His friends call him the General, the Commissioner. One elderly woman says he was “moneyvated…” Amal, his friend from GPS and SJC, says that at high school he sold everything from T-shirts to mint sweets to skinny jeans. He was into making dollars. Plain and simple…

And yet he was “bruk” — all the time. He was a ‘baller without the dollars’ – you could ask his momma. He terrorized her and his father — like any young man, he always had the need for money. Turns out he used to give away money like he was some area representative. He used to borrow money to give away money. That was the heart he had.

But he was a kid of substance, who could move in every circle, in every nook and cranny. His friends were young and old, and some were very old. They came from the Northside and the Southside – from Los Lagos to Los Angeles. He rolled every, and anywhere – with anyone, at any age, at any level. And he was completely comfortable – magnetic smile, beaming personality and all.

Scriptures say “and a little child shall lead them.” In death Evan says something to us – to our immediate families and to all families everywhere.

That was how he lived. In a sense it was as if Evan was raging against time, fighting to do all he wanted in the short time he had. It was as if he somehow knew that he wouldn’t be here long; that time was not his ally.

Please forgive me if I have idealized my nephew some. But I’ve taken my lead from you, his many friends and acquaintances, who in his death have shown us that he was larger in life than we could ever have imagined. The skinny kid, weighing in at 140 pounds, was a big man with a giant heart!

We don’t know for sure what happened in the early morning of Saturday, May 10th. What we know for sure is that Evan is here no more.

We’ve heard that “the passage of time never really heals the tragic memory of such a great loss, but we carry on, because we have to, because our loved one would want us to.”

I still believe in Jesus – that one day he will heal all our broken hearts. In the meantime, we grieve the loss of our young soldier. And in the words of the great Negro spiritual, our boy is free at last! Rest in peace, my youth! We shall all meet again soon!