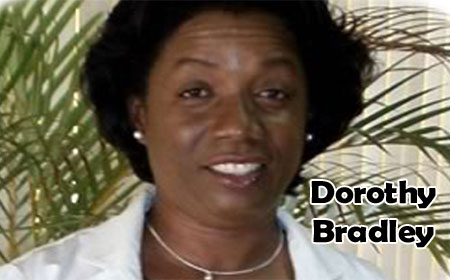 BELIZE CITY, Thurs. Aug. 25, 2016–A damning special audit leaked to the media earlier this week, detailing multiple cases of fraud in the issuance of Belizean visas, nationality and passports—including the high profile case of Korean national Won Hong Kim—is due to be tabled in the National Assembly tomorrow, when the House of Representatives meets in Belmopan and the audits should become public documents.

The audit, published by Auditor General Dorothy Bradley, helps explain how Belize has in recent years seemingly become a hideaway for hoodlums, as persons alleged to be human traffickers and money launderers were listed among those fraudulently assisted with Belize Immigration documents.

Bradley now calls for a police investigation into missing files (164 of which could not be found in October 2013 for nationals of Guatemala, Honduras, China, Britain, Nigeria, Lebanon and Taiwan), allegations of fraud, and possible police collusion in her set of recommendations.

However, she also points to the need for an international police investigation in an attempt to identify fraud agents who may have been using locations such as the UK, Singapore, China and Taiwan to operate the Immigration scheme.

Pending the outcome of the investigations, Bradley is calling on the Director of Immigration and Nationality to ensure that Belizean nationality is revoked for all persons cited in the audit, and a recall and cancelation of all such issued passports. 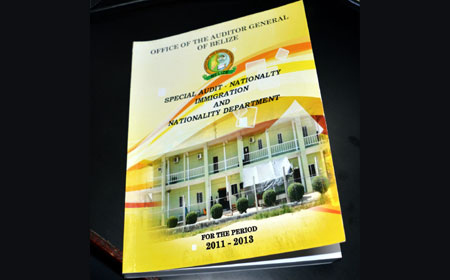 Bradley’s report documented that several ministers and area representatives intervened for persons seeking to become new Belizeans, when there is no provision for them in the Nationality Act for them to do so. Among those named are Edmund Castro, Erwin Contreras, Manuel Heredia, Jr., Rene Montero, Santiago Castillo, Ramon Witz, Carlos Perdomo, Eden Martinez, Gaspar Vega, John Saldivar, Pablo Marin, Gabriel Martinez, Michael Hutchinson, and Elvin Penner.

When the matter of ministerial intervention was raised in connection with the visa scandal in October 2013, Prime Minister Dean Barrow had said that while it is legitimate for a minister to assist a friend, “…if I hear you intervene 10 times and I hear you intervene 20 times – what I am to think? Except that you’re involved in a hustle. If you hang out with Alibaba you must be one of the 40 thieves…”

Penner was personally involved in facilitating the application for Kim, who got a Belizean passport without the requisite documentation being submitted, purportedly because he promised he would deliver those documents, but never did.

Even worse, Kim was in Taiwan custody at Yilan Detention Center from 1 August to 26 September 2013, so he was not in Belize on 2 September when he supposedly applied for his Belizean nationality and when the nationality certificate was backdated, the audit revealed.

Kim “had strings” with higher-ups in Government, as the reports indicated that he was being facilitated by Belizean officials, including Eric Chang, former councilor at the Belize City Council. The number on the nationality certificate issued to him in 2013 was issued the year before to a Guatemalan, Josue David Coc Uk, who had paid $750 to receive it in October 2012, the audit said.

“Two of those persons, Won Hong Kim and Yakup Sut, never came to Belize to process those applications, while the other three persons, Yiu Pang Chen (Peter Chen), Jackie Jie Qin (Marc Ching) and Quoc Winh Truong, entered Belize as visitors through the PGIA and soon after fraudulently obtained their nationality, which was issued under Section 10 of the Belizean Nationality Act, and subsequently were issued their Belizean passports.

“This Nationality report will reveal more of such cases. We did not receive the nationality files for most of the fraudulent cases we found…” the audit said.

The reports furthermore indicate that “in most cases examined, the processes and procedures were circumvented, displaying blatant disregard, at every level, for a well-established institutional framework…;” and “the system was manipulated to facilitate apparent fraud in so many ways…”

It revealed that some applicants got visas as well as nationality certificates and passports, and “such was the case with Wong Hong Kim, Yakup Sut and other names,” and it later detailed a sample from 100 names found for the period under audit, 2011 to 2013.

The result of the investigation was a three-volume audit report for visas, nationality and passports, which was published by the Office of the Auditor General. This article focuses on the issuance of Belizean nationality and the consequential issuance of suspect passports which were scrutinized in a comprehensive probe by the Audit Department after Bradley got wind of information documented in an internal Immigration memo, which raised suspicions about the issuance of visas to enter Belize.

According to Bradley, it was after the visa investigation was launched that a passport scandal broke. That scandal was evidently over the issuance of a Belizean passport to Kim, for which then Minister of State responsible for Immigration, Elvin Penner, was swiftly sacked from Cabinet.

The substantive Minister, Hon. Godwin Hulse, had unveiled details to the Barrow administration of his findings, for which Penner was never held criminally liable.

The Penner scandal merely scratched the surface of what has now been revealed to be a corrupt network which authorities now suspect had penetrated several government agencies, key among them being the Police, the Vital Statistics Unit and the Immigration Department—critical, since birth paper documents and police records are supporting documents used to acquire Immigration documentation.

What was even more shocking was the finding by the Office of the Auditor General that despite the discontinuation of the Belize Economic Citizenship Program more than a decade earlier (in 2002), persons were still being issued passports through fraudulent backdating.

Amandala readers will recall that back in October 2013, we reported on what had been deemed as an “online scam,” purporting to offer Belize passports under the economic citizenship program for as low as US$9,900. The website for IPC Belize, which the Auditor General cited in her report, has since dropped the price to US$8,900.

The audit notes that Oleg Kalugin, whose place of birth is identified as Russia, was fraudulently issued a Belize Economic Investment Citizenship Nationality Certificate #22/01/98 and Passport P0209568. He supposedly came to Belize on 16 July 2012 on a tourist visa, and the very day after his arrival, was issued a Belizean passport based on a certificate dated 1998 and a passport recommendation from a person identified as Justice of the Peace Demencio Cal.

The suggestion, said the audit report, is that “”all documents including his nationality certificate had been prepared for him prior to his visit and that persons at the Immigration Department may have facilitated his arrival to Belize and accepted fraudulent documents at the Passport section…”

Of note is that the website offering instant Belizean citizenship purports that they have “direct local contacts…” which can facilitate the issuance of a Belize passport in as little as 6 months, although under Belizean law, a passport to a naturalized Belizean is issued after a residency period of 5 years, and some used hotels in Belize as their addresses.

In 2013, when we reported on the claim by the website that they could expedite the acquisition of Belizean citizenship, Immigration Minister Godwin Hulse told us that any scheme like that would be illegal. He indicated to us that he and the Director of Immigration would look into the matter, and we were later advised the matter had been turned over to the international intelligence agency – Interpol.

The audits also demonstrate persistent irregularities, such as the absence of proper vetting for persons claiming to be Canadian and US nationals, who can freely come to Belize without a visa. It said that, there were “no indications that consistent verifications were done to authenticate documents presented.”

The issuance of a Belizean birth certificate to the man who assumed the fake identity of William Mason, the local alias of a man who had previously been known in Canada and elsewhere as Rajesh Ouelett, led to four officers of the Vital Statistics Unit, who are reportedly facing criminal and administrative proceedings. There may be many more similar cases.

Notably, there were cases unearthed in the audit in which name changes were facilitated by the Vital Statistics Unit for persons who were seeking to acquire Belizean nationality and passports.

The report points to “…deliberate changing of the names of persons, complete names in some instances, facilitated by the Belize Vital Statistics Unit…” for some persons named in the audit, before applications were made for Belize passports.

Right after the Penner scandal broke, Prime Minister Dean Barrow said at a press conference that he had heard reports that a number of Cabinet Ministers are involved in corruption, including the selling of visas to foreign nationals, mainly from Asian and Middle Eastern countries. He said that he had spoken to them repeatedly about the allegations, and although he had no proof, he told them: “if you are doing it, for God’s sake, stop it! Stop it!!”