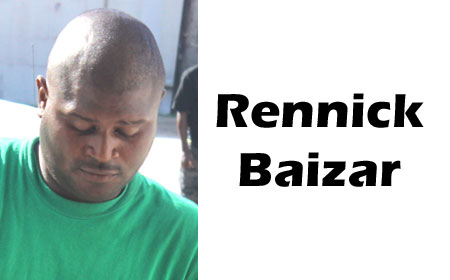 BELIZE CITY, Wed. June 29, 2016–An ex-Belize Defence Force soldier, who has built a horrifying catalogue of acts of violent, domestic abuse against his ex-common-law wife and mother of his children, totally disregarded a Belize City Family Court order of protection on multiple occasions and was slapped with a 5-year prison sentence and a robust court fine when his cases concluded at the court on Tuesday, June 28.

The 5-year prison sentence and $12,000 fine that Family Court Magistrate Natalia Carter levied on Rennick Baizer, 32, is not the end of his legal entanglement. Baizer still has a criminal charge for wounding pending at the Belize City Magistrate’s Court, based on a complaint Shawna Gillett, 28, his children’s mother, filed with police.

Baizer appeared before the court to face charges for three different violations of the protection orders the court had given Gillett against him since their separation.

The court’s $12,000 fine was the penalty for one of his violations of the protection order; for the other violation, Baizer was sentenced to two years.

The 2-year sentence, however, is to run concurrent with the third sentence, which is a 5-year sentence. Therefore, overall, Baizer will only serve a total of 5 years.

The violations for which the fine and 2-year prison sentence were imposed occurred at Gillett’s home, according to the evidence that was presented at the trial.

Late in 2015, Baizer allegedly violated the order of protection when he met Gillett at Pier One and harassed her. Gillett alleged that Baizer threatened her and scornfully cursed her in front of a number of persons who were at the club, and threatened to push her into the sea.

Baizer, in his defense, told the court that while he was at Pier One, he never saw or spoke to Gillett.

Then, to back up his claim that he did not see or speak to Gillett, Baizer brought a witness to testify on his behalf.

To secure the conviction, however, the prosecution had to prove the breach of the protection order, which has a condition that Baizer had to obey. He was never to engage Gillett, or threaten any kind of violence against her.

The prosecutor was able to prove that he, Baizer, indeed had threatened Gillett, to push her into the sea.

In this Family Court case, Baizer had only threatened to push Gillett into the sea, but in the case before the Magistrate’s Court, Gillett is alleging that he pushed her into the sea near BTL Park, and she sustained injuries that a doctor had classified as wounding.