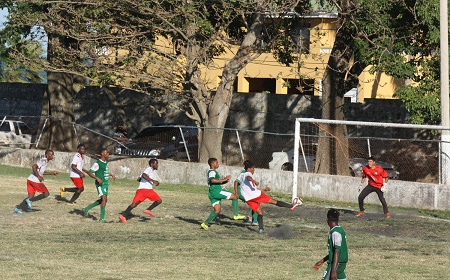 BELIZE CITY, Mon. Aug. 24, 2015–The news began filtering through the football community on Saturday night, and spread quickly when it was made public on Krem’s Press Cadogan Sports Show on Sunday morning, that FC Belize, the last remaining Belize City based team in the Premier League of Belize (PLB), had withdrawn or been dropped out of the competition before playing their first scheduled match, which should have been against Placencia Assassins on Saturday night, August 22, at the Michael Ashcroft Stadium in Independence.

Following their second match forfeited to end the previous season, there was talk of a possible suspension of FC Belize from future competitions.

But the new management of the Premier League, which now has a board of directors and a hired General Manager, Wilhelm Miguel, to run its competition, had appeared sympathetic to the plight of FC Belize, which had struggled with ownership controversy for the past year, along with a tremendous handicap with the closure of the MCC until early this year. And just a couple weeks before the start of this new season, the lights at the MCC were taken down by the National Sports Council, making work-out difficult for the team.

Nevertheless, it had appeared that the hurdles were crossed, and, after the League even conveniently scheduled their first
game in Week 2 of the tournament, it seemed that FC Belize management would after all give Belize City a team to ride with in the new PLB season.

Well, it is now confirmed; FC Belize will not be participating in this PLB 2015-2016 Opening Season. Reportedly, after many missed deadlines, the league finally pulled the plug on Friday, when FC Belize; failed to meet a 12:00 noon deadline with some important competition documents.

So, yesterday afternoon at the MCC Grounds, Belize City fans had to resign themselves to the fact that the only team playing with the MCC as home turf was going to be Belize Defence Force FC; and they were hosting the defending champions Verdes FC, just off their impressive nil-nil draw against Mexico’s Queretaro at the FFB Stadium the
previous Tuesday night.

In their first outing the week before, BDF had lost 5-1 to the young Wagiya squad out of Dangriga. City fans were hoping it wouldn’t be another rout; they wanted a good contest. And BDF gave them one. Verdes was not at full strength.

Brazilian striker Alcides “Paco” Thomas was still recovering from a leg injury; so was Trinidadian import Oswin Williams
and outstanding midfielder Nahjib Guerra; and Jarret Davis was serving a red card suspension from their last outing against Placencia Assassins. Regular starting goalkeeper Benito Moreira, who was impressive against Queretaro, also remained on the bench for the full ninety, giving rookie goalkeeper Yusef Guerra the honor for this match.

For their part, Gregory “Paisa” Cantun was back in the BDF coach’s box, a position last held by Charlie Slusher, now assistant national team coach. Number one goalkeeper Tevin Gamboa was not there to begin the game, and his replacement Michael Bevans made a spectacular save, tipping a shot over the cross bar, before being replaced by Gamboa a half hour into the match.

Leon “Chow” Cadle handled the sweeper position for BDF, and the nil-nil score at the half accurately reflected an evenly matched encounter.

“Back eena di day,” Carballo had “Stud” Hendricks, and Turo Leslie had Coro Usher; but it seems nobody pays much mind to “feeding” Deon McCaulay, the most efficient finisher in the game today. Ten minutes into second half, Verdes midfielder Jesus Patino did the job with a fine serving into the box from the right side, and Deon made good on one of very few opportunities in the game for the 1-nil lead.

But BDF was not giving up so easily, and their feisty young midfield/striker John King served notice with a wicked spot kick from forty yards that just scaled the cross bar on the left side of the southern goal. It was another free kick, this one from about thirty yards on the right side at around the 85th minute, and King sent this one hard and diving low, so it bounced in the black dust at the edge of the 6-yard box, where his alert teammate Orland Trapp appeared to help it along into the net past a bewildered Yusef Guerra in goal for Verdes. 1-1 ball game.

As short staffed as they were, Verdes may not have lost much face with the draw to BDF; but there are issues they apparently still haven’t worked out yet. And it regards egos and would-be stars from different galaxies.

In the only other game this past weekend, on Saturday night at the FFB Stadium, Marlon “El Matador” Meza struck twice to lead Belmopan Bandits to a 2-1 victory over visiting Wagiya.

(We await the official detailed results from the league.)