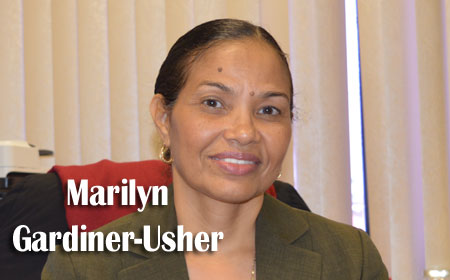 BELIZE CITY, Mon. Aug. 22, 2016–New banking sector reforms are due to be tabled in Parliament on Friday which are intended to modernize money transactions, cutting down the waiting period for customers to receive credit from check deposits and enabling the kind of networking that will allow customers to transfer funds in just minutes from an account at their bank to a party at another bank in Belize.

“You can be home in the night and make a credit transfer to somebody in Dangriga at any time of the night—as long as they have a bank account… I can’t wait for it…” said Marilyn Gardiner-Usher, Deputy Governor – Operations at the Central Bank of Belize, who explained the developments in the context of the establishment of a national payment system (NPS) for Belize. The go-live target date is September.

She told Amandala that the changes should reduce operating costs for commercial banks, and the Central Bank expects that the reduction will be passed on to customers.

Gardiner-Usher said that the current system is inefficient, and the Central Bank—the regulatory authority which will be providing oversight of the national payment system—hopes to raise the bar by improving safety and efficiency. The reform complies with core principles developed by the Committee on Payment and Settlement Systems (established by the G10) and other payment system experts, and are in line with international best practices, she added.

Currently, Belize’s payment system is largely paper-based, but online banking and the use of payment cards—debit and credit cards—represent a gradual shift towards electronic banking. The payment system reform will cover instruments such as credit transfers, check clearing, direct debit facilities for bill payments, as well as a new instant funds transfer system which will be available 24/7.

According to Gardiner-Usher, the intent is to retain paper checks, since they can still serve as an option for those who might not be able to take full advantage of the electronic services, but the intention is to reduce the importance of checks.

The process to establish the national payment system began with a country study in 2010, which built on a prior study completed in 2006. The banking sector has been involved from the outset, Gardiner-Usher said.

“Banks are ready to go. They have been onboard from the concept stage of the project,” Gardiner-Usher said.

She explained that ahead of this latest reform, there was an earlier reform which resulted in a magnetic ink character recognition (MICR) line being placed on checks. This machine readable feature allows banks to scan checks and automatically update customer accounts.

Even though banks can process checks more easily, the transfer of credit to accounts still takes days—three days for district checks and up to seven days for out-district checks. With the national payment system, the time can be reduced to two days.

Gardiner-Usher explains that “interoperability,” the ability for transactions across banks to be cleared almost instantaneously, will allow payments to move quickly.

“The deficiency [now] is that there is no switch, no network that connects banks. Without this [interoperability] … you cannot easily make an electronic payment to another party at another bank,” she explained.

“While we have access to checks and credit transfers, they are limited in their use because of this lack of connectivity,” Gardiner-Usher said.

One example of an expedited electronic funds transfer is the bulk credit transfer facility used for salary payments. Instead of businesses doling out cash to individual employees or writing checks, which have to be processed by the bank, funds are deposited directly in the accounts of their workers. Being able to perform those transactions across banks should improve the efficiency of the payment system.

The biggest change will be widening the choices and availability of payment instruments and services, the Deputy Governor explained.

Large-value credit transfers—those bigger than $50,000—would be completed electronically in two hours; and large value checks would be replaced by this kind of credit transfer facility to reduce “settlement risk,” Gardiner-Usher said. Furthermore, customers will be able to use this option to move time-sensitive payments across banks in a matter of minutes, she explained.

Under the new regime, these large value and time sensitive payments, and net obligations resulting from funds transfers between banks will be made through the real time gross settlement system, operated by the Central Bank.

Gardiner-Usher, who is the project coordinator of the NPS reform, said that the role of the Central Bank is to operate the new system; oversee other payment service providers licensed by the Central Bank; and also keep abreast of current and new developments in the system and manage them, to ensure that they meet the objectives for safety and efficiency. We asked whether consideration is being given to cyber security. The system will meet the highest security standards, and licensees will have to meet the requisite standards for safety and efficiency, the Deputy Governor told us.

The House of Representatives is due to meet at 10:00 a.m. on Friday, August 2016, to consider changes in the law to support the new national payment system. They include the National Payment System Bill, 2016, which will, among other things, provide for the establishment of a National Payment System and for its regulation and oversight; and consequential amendments to the Electronic Transactions (Amendment) Bill, 2016, to expand the scope of negotiable instruments to which the Electronic Transactions Act can apply.