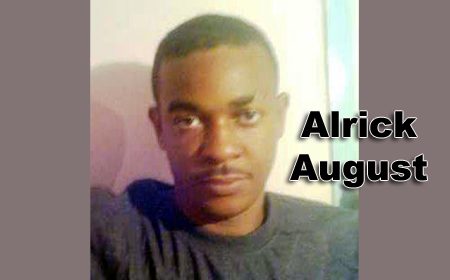 BELIZE CITY, Thurs. Feb. 9, 2017–The future of four children all under age ten hangs in the balance because their father, who is their sole bread-winner, is in an induced coma in the Karl Heusner Memorial Hospital (KHMH).

Alrick August, 23, a sales representative at the Transparent BPO (Business Process Outsourcing) call center, was on Western Avenue walking towards his home on Electric Avenue sometime before 9 p.m. on Wednesday when he was accosted by an armed assailant.

He was shot five times in his chest, twice in his left arm and once in his neck. He was rushed to the KHMH and admitted to the Intensive Care Unit (ICU) in a critical condition.

One of his lungs has collapsed and his ribcage was fractured.

His common-law wife, Shian Pennill, 20, today told our newspaper that August came under fire while leaving a friend’s house, where he had been socializing.

She told us that August was simply in the wrong place at the wrong time, as he is not involved in any criminal activity.

According to her, he has since lost a lot of blood and is in need of blood donors. Those with O negative blood wanting to assist August can contact her at 601-6736.

Despite a grim prognosis, Pennill is hoping that her husband makes a miraculous recovery. In the meantime, she said, she will have to adapt to the changes.

Police are yet to detain any suspect.