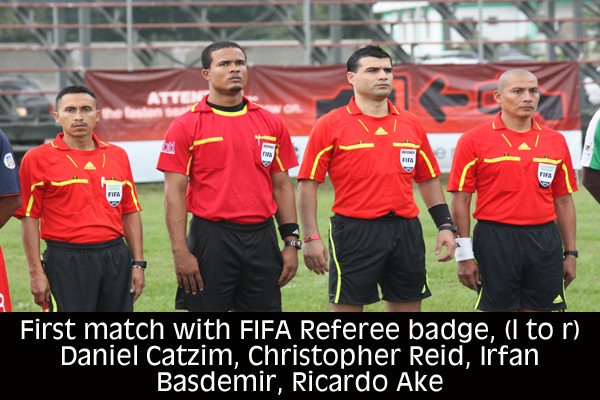 The entire Football Federation of Belize Executive was in attendance today at the media luncheon to honor 4 FIFA Referees at the Santorini restaurant near Mile 46 on the George Price (Western Highway) on the outskirts of Belmopan. Also in attendance was the President of the Referees Committee, David H. Jones.

In his address to the newly certified FIFA Referees 2013, FFB President Ruperto Vicente said that, “Refereeing is a key part of our sport. Without referees the game is not official. So, referees are an important and integral part of our football.” He congratulated the new FIFA Referees on their achievement, noting from his own past experience that, “It is never an easy task to pass the FIFA test… that is administered by FIFA… and to move on to the list of FIFA International Referees.” He also reminded the new inductees that, “Being a FIFA Referee, you must understand that it puts a heavy responsibility on you, because other referees will be looking at you as their role model. You will be the one to set the pace for them.”

Vicente also used the occasion to encourage more young people to become referees. “I am calling on the Referees Committee to recruit younger referees, because the game is now a game for youth, and older referees cannot keep up with the youth…. Our football is growing, and it will grow a lot more this year, and in years to come. There will be more activities, more tournaments, and that means more football being played in this country – youth football, league football, inter-district football, semi-pro level football being played; and you will also have international matches to assist with and to referee. So, we are calling on the Committee to recruit younger referees, and to recruit them even from high school. We need referees who can critically think; referees who can make decisions without being questioned or without being intimidated. Those are the kind of referees that we’re looking for. We need those kinds of referees today.

Executive Member with responsibility for referees, Marlon Kuylen, who coordinated the training and certification process, then presented the FIFA Referee badges to the proud honorees.

The same 4 FIFA Referees were on duty later in the afternoon at the international friendly match between the Belize National “A” Team and visiting Platense FC from Honduras at the FFB Stadium. Irfan Basdemir was the head referee for the game, with Daniel Catzim and Ricardo Ake acting as assistant referees, and Christopher Reid the 4th official.