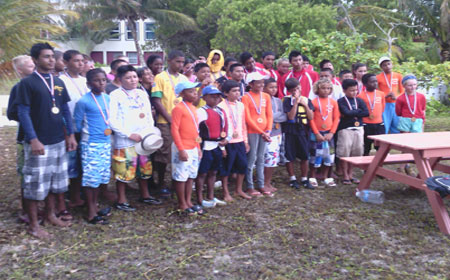 The 47 boats sailed in two fleets – the Open Fleet category for more experienced sailors up to age 15, and the Green Fleet for the beginners. With excellent weather on Saturday, the Open Fleet completed 5 races, and Green Fleet, 4.

On Sunday morning, an approaching tropical wave prompted the canceling of any further races and a hasty withdrawal from St. Georges Caye.

The scores were computed with one discard (of the worst score).

Main sponsors for the event were National Institute for Culture and History, Teichroeb & Sons, and Kubuli. Acknowledgements to: Print Belize; sailboat “Ragga Empress” on the start line, and Belize Coast Guard vessel “CG11” on the finish line; Joe Fuzy and the St. George’s Caye Village Council.