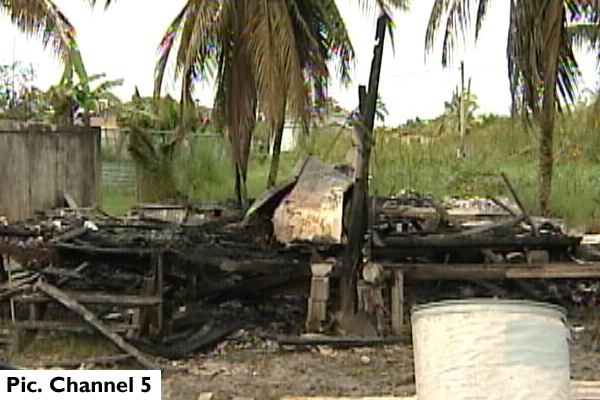 A family of five from rural Belize is requesting the public’s assistance after a blazing inferno charred their home and belongings last night at around 7:00 p.m.

The McKay family – who have been living in Ladyville village for the past 25 years – are now homeless after a raging fire completely gutted their 3-bedroom house, which was situated on Cusco Street in the Mitchell Estate area of Ladyville.

Fortunately, no one was at home at the time of the blaze. The cause of the fire is believed to be a lit candle which was left unattended inside the home.

Jenna McKay, 22, who was one of the occupants of the house, told Amandala that she went across the street to her mother’s house sometime after 7:00 p.m. on Thursday night to get something for her children to eat.

While there, she said that her mother noticed that flames were coming out of one of the rooms of her (Jenna’s) house; and upon making further checks, they saw that the bungalow structure was ablaze.

They immediately attempted to douse the fire, but it quickly engulfed the wooden house, completely destroying the residence, along with everything that was inside it.

According to Jenna, the fire started because of a lit candle that fell on the mattress in her room. She mentioned that luckily none of her two children were inside the home when the fire broke. She stated, “My daughter was with my mom and my [9-month old] baby was with me. I think it was the breeze that knocked over the candle.”

As soon as they were called, firefighters went to the scene of the fire; however, nothing could have been salvaged despite their best efforts to extinguish the blaze.

Operations Officer at the National Fire Service, Benisford Matura, confirmed to Amandala that the fire was indeed caused by an unattended candle that was left in one of the bedrooms. He stated that at about 7:15 p.m. on Thursday night, the Ladyville Fire Station got a call from the Ladyville Police regarding a fire on Cusco Street, after which they immediately dispatched the fire tender. Matura said, “Upon arrival, a 20′ X 22′ wooden structure measuring approximately 3 feet off the ground was totally engulfed in flames. They got into operation and did their best to extinguish the fire.”