Home Features Franz Parke - What it is, is what it is!
Features

Franz Parke – What it is, is what it is! 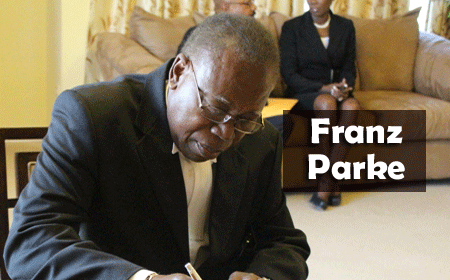 Who is Franz Parke? Mr Parke is a Jamaican who has been living in the United States of America since 1980 – 37 years. He graduated with Prime Minister Barrow from law school way back in 1975. He served as an entry level criminal prosecutor in Jamaica from 1975 until 1980 when he migrated to the USA. Since then he has never practiced law in the Caribbean or any Commonwealth country.

In the United States, Mr Parke worked in the accounting field from 1980 until 1987. Since 1988 he has been a licensed mortgage broker. So between 1980 and 1990 he did not practice law anywhere. In 1990, he qualified to practice law in the United States of America. He then practiced as Assistant State Attorney in Florida from 1990 until 2001 – prosecuting criminal cases. He started practicing privately in 2002 and has been doing so in Florida up until now.

In summary, Mr Parke’s professional experience is as follows: 5 years as a junior prosecutor in Jamaica; about 8 years in accounting, then 11 years doing criminal prosecution in Florida, followed by 16 years of private practice in Florida. So, of his 32 years of practicing law, only 5 was as a junior lawyer in a Caribbean jurisdiction and 27 as a Florida attorney-at-law.

A person like Mr Parke, who has been practicing law in Florida for the past 27 years, is not “a high calibre appointee”. He is therefore not qualified to be a judge on the Court of Appeal. He is not qualified because he is not familiar with our laws; he is familiar with the laws of Florida. He is not qualified because he has no relevant practice or experience with laws in Belize or the Caribbean; he has practice and experience with the laws in Florida. Without relevant practice or experience, Mr Parke does not satisfy the criterion established by the CCJ – a high calibre appointee.

There is an important issue at stake here – the rule of law. The Constitution guarantees to one and all the right to a fair hearing in all judicial proceedings. This is secured by having cases tried before independent and impartial courts or tribunals that are capable of fairly trying the matters before them. Inherent to this due process exercise is a precondition that judges have certain minimum qualifications, and that they are experienced enough in the law to hear and decide cases. So for example, if you have a case in Florida, you would only get a fair hearing before a court that is presided over by a judge steeped in the law of Florida.

In Belize, we should expect and insist on judges who are experienced and expert in the laws of Belize or the Commonwealth. It is unfair and therefore unconstitutional to have Franz Parke who has been exclusively practising in Florida for the past 27 years, and therefore unfamiliar with our laws, sit in judgment here in Belize. It is not possible to get a fair hearing before a judge who is experienced in Florida law, but not in Caribbean or Commonwealth law.

Belize deserves better than a judge who has to be learning on the job!

Mr Franz Parke does not have an impressive curriculum vitae – he does not appear to have distinguished himself in any field of law. His curriculum vitae does establish that he is a Florida attorney-at-law who has significant experience in practising law in Florida. But that Florida experience is of little relevance and inapplicable here in Belize. But yet, he is about to be appointed to our Court of Appeal for five years.

I believe that the Prime Minister will proceed with the appointment of his unqualified former classmate. That is his style. This is most regrettable. It will result in legal challenges to Mr Parke sitting as a Justice of Appeal. This ill-advised appointment is a retrograde step and will tend to undermine confidence in the independence of the judiciary and the rule of law.