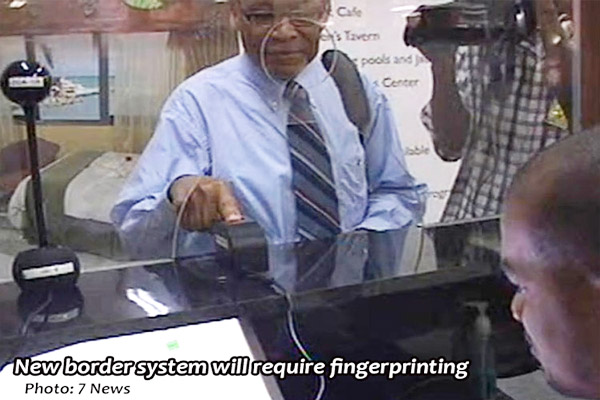 BZ$1 million provided: fingerprint and passport scanning now in effect at all posts except cruise port

This morning, Belize Immigration authorities unveiled a newly computerized border management system, implemented with funding from the United States government. The launch took place at 8:00 at the Philip Goldson International Airport, where Minister of Labour, Local Government, Rural Development, NEMO, and Immigration & Nationality Services, Godwin Hulse—allowing himself to be fingerprinted on the new system—demonstrated to the media how the new system works. Hulse likened the system to that used by the US at ports like Miami.

Deputy Chief of Mission at the US Embassy in Belize, Margaret Hawthorne, noted that Belize is a prime tourist destination and over 900,000 tourists visit from the US yearly.

“With more people passing through Belize, however, security concerns inevitably arise. Minister Hulse, his ministry and many other agencies work extremely hard every day to ensure that the country remains safe. The US Embassy recognizes that if Belize remains safe, so too does the United States,” she said.

Under the Central America Regional Security Initiative (CARSI), the United States Government provided BZ$1 million for the project. The concept, formed in 2010, began to be implemented in 2011, with an initial assessment by the Geneva-based organization, International Organization for Migration (IOM), which also trained Belize Immigration Staff.

At a CARSI ceremony held last June, the Embassy detailed that they had partnered with Belize Immigration and IOM to install an automated border management system at the airport and the two main border crossings; and under that program, all persons entering or exiting Belize would, for the first time, have their passports scanned, providing a clear electronic trail.

Delbert H. Field, Jr., IOM’s Chief of Mission in Guatemala, said at today’s launch, that the new border management information system will cover all of the country’s air, land and sea borders, as well as all immigration offices—that is, all points of entry except the Fort Street Tourism Village’s cruise port terminal, Hawthorne clarified.

“The new system will provide Immigration officers with the latest technology for the swift processing of bona fide travelers entering and exiting Belize, while at the same time giving them the tools necessary to identify and stop those entering the country to commit crimes,” Field said.

Hulse said that, “This system allows us now to check on those leaving, so we can know who has overstayed their time, who has skipped the country illegally, and who is going where…”

According to Hawthorne, IOM customized the Personal Information and Registration System (PIRS) for Belize. The US security initiative, CARSI, provided the computers for the collection of the migrant data.

“[No longer] will you enter … Belize and be a statistic on a piece of paper that used to meander its way through the Immigration system and the Tourist Board system and find its way somewhere in a filing cabinet; but you will be recognized now instantaneously across the country and possibly across the world. So it’s a warning to those who may want to enter this beautiful country to do things that they are not supposed to do, because we will catch you,” Hulse commented at the launch.