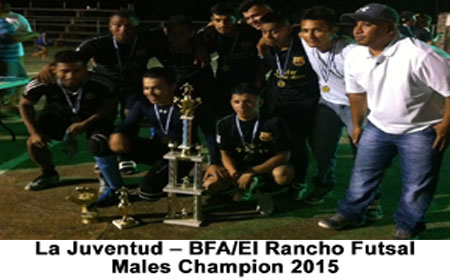 On Saturday in the Futsal Females championship finals, Las Flores Girls got a goal each from Lenny Ortiz and Berta Garcia, to register the 2-0 victory over Real Madrid Girls. Next,was the Futsal Males championship finals where La Juventud won, 4-3, over Turbo Boys. Shaking the net for the victorious La Juventud were David Madrid with a hat trick (3 goals) and Victor Caliz; while, Michael Lewis (2 goals) and Jose Galdamez scored for Turbo Boys.

The Belmopan Football Association would like to say special thanks to the management of El Rancho Restaurant & Bar for making our games possible, and to the President of the Football Federation of Belize, Mr. Ruperto Vicente, who has contributed and were available for distribution of trophies and awards to our Male and Female Futsal champions 2015.

Four games were played at the Las Flores Community football field on Sunday, July 19, in the BFA 1st Division Tournament. In game 1, Las Flores FC defeated Cotton Tree, 3-1, with goals from Karlis Tello (61’), Yony Gonzalez (83’) and an own goal from Cotton Tree’s Erick Ayala (52’); while Milton Hernandez (73’) got the sole tally for Cotton Tree. Game 2 was a 2-nil win for Camalote Warriors over San Martin FC, courtesy of goals by Norman Neal (41’) and Belhem Guzman (90’). In game 3, Israel Clavel struck twice (51’ & 80’) and Marshall Nunez (81’) added another to give Alliance United the 3-0, win over Club Atletico. And in game 4, Roaring Creek United dropped UB Black Jaguars, 3-1, with a goal each from Avery Galvez (73’), Clifbarn Neal (75’) and Orin Reneau (80’); while Justin Wade got the lone goal for the Jaguars.