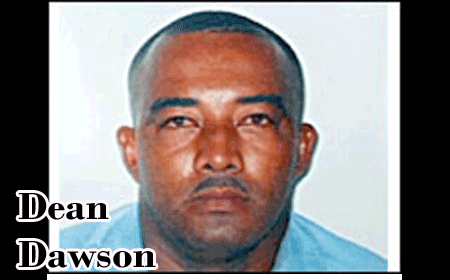 BISCAYNE, Belize District, Thurs. Mar. 31, 2016–As daylight breaks on the stretch between Mile 22 and 23 on the Philip Goldson Highway, debris from a traffic accident becomes visible. There are plastic pieces from the front portion of a Isuzu vehicle on the roadside, a pair of torn slippers and blood stains, all telling a grim tale, along with the long-tire impression that were cut into the surface of the road, illustrating the driver’s effort to stop after impact with a man on bicycle.

Dean Dawson, 45, a mechanic and resident of Gardenia, Belize District, lost his life when a government vehicle, an Isuzu D-Max pickup with the legend, “Press Office,” that was being driven by the Government Press Office director Dorian Pakeman, knocked him down, killing him instantly.

This morning, Ladyville police confirmed that the 34-year-old Pakeman has been served with a Notice of Intended Prosecution (NIP), and the file, along with the police’s particulars about the accident, have been sent to the office of the Director of Public Prosecutions.

The badly damaged burgundy Isuzu D-Max has been impounded by Ladyville police and has been covered up on the compound of the Ladyville Police Station.

Today’s police report on the accident said, “On 30.03. 16 at 11:40 p.m. police visited Mile 22 ½ on the Philip Goldson Highway, where they saw a burgundy Isuzu D-Max with license plates B2029, property of the Government of Belize, in some nearby bushes with its front portion extensively damaged, and about 50 feet away from the vehicle was 45-year-old Dean Dawson Sr., mechanic of Gardenia Village lying motionless. Also on the side of the highway was a blue and white bicycle completely damaged…”

At a police press briefing this morning, Inspector Johnnito Cocom explained that Pakeman told police that he was heading from the direction of Orange Walk to Ladyville and that between Mile 22 and 23 in Biscayne he observed a person riding a bicycle who suddenly swerved into his lane. He tried his best to avoid a collision by swerving to his left, he told police, but he still ended up hitting the cyclist, who was later identified as Dean Dawson, Sr.

Cocom told reporters that Pakeman gave police a caution statement and a urine sample was taken from him.

Cocom said that there were no eyewitnesses to the accident. 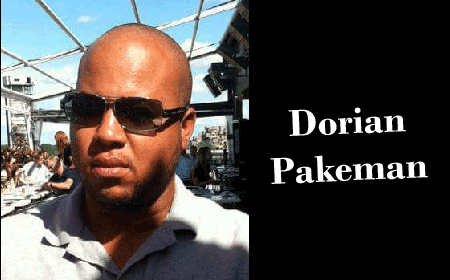 Cocom, however, apart from declaring that the investigation is in its very early stages, made it his business to say, “As the investigation unfolds, apparently, Mr. Dorian did not have the fault of the accident.”

When an Amandala reporter challenged him on that singular conclusion, Cocom would only say that “that would be dealt with in court.”

Therese Abraham, Dawson’s common-law wife who arrived on the scene minutes after her husband was killed, told reporters that she was at home around midnight when she got word that “Dean was shot.”

“From the position of the body on the road, I realized that he was not shot; he was knocked down,” Abraham said.

Abraham said that her oldest son, who is very observant, told her that the pickup had a broken windshield and that could be the vehicle that knocked down his father. 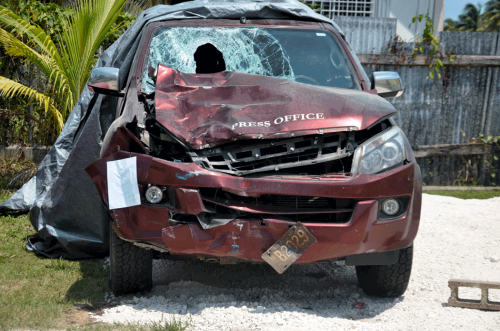 “I approached the vehicle and the police told me to move away from the vehicle. I moved away and waited for the crime scene people to come. After they finalized everything, I said that I would not move from out there until I take pictures of that vehicle. After about an hour or so a tow truck came and I used that opportunity to take pictures of the vehicle. The vehicle is extensively damaged and the two airbags were deployed,” Abraham said.

“We got from a witness who was out there that the D-Max overtook him and he just heard a loud bang and he saw the vehicle run off the road. He said he saw the body on the road and he put on his hazard lights and when the police came, he just left,” Abraham said.

Abraham said the police should have gone back on the road today and continued to process that crime scene, and maybe they would have seen how that D-Max came off the road on the wrong side.

“They cannot say that he rode in front of the vehicle. Dean is an old-school bushman and he would not have done that. He was not drunk. He was on sick leave and he had his medication right in his pocket,” Abraham said.

“As I told the police, Mr. Pakeman can lie you; he can lie to everybody else, but God knows what happened,” Abraham said. “This is a human life. He has family that loves and cared for him. Dean was a hard worker, he was not someone who would go and beg for hand-outs from no minister. He has children to support and I hope that something amicable can be worked out,” she said.