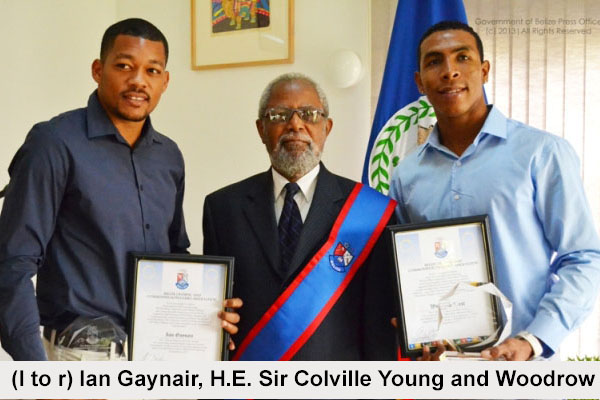 At an award ceremony today in Belmopan, national football team members Ian “Yellow” Gaynair and Woodrow West, who had been previously honored by CONCACAF at its Gold Cup 2013 in the USA for rejecting and reporting attempts by match-fixers, were today honored for their “outstanding honesty and patriotism” by the Belize Olympic Committee’s Fair Play Commission. Accompanied by fellow players and staff of the Belize National Team, Gaynair and West were each presented with the Gilmore Hinkson Fair Play Trophy at Government House in Belmopan by H.E. Sir Colville Young.

(Ed. Note: The award ceremony was originally scheduled for August 6, but had to be postponed as one of the awardees was reportedly out of the country.

We recall that Mr. Hinkson was also Secretary of the Belize Amateur Football Association in the 1960’s. He was a staunch Olympian who believed in amateurism and thus not supportive of the effort of the likes of the Mugger and Big Mole in aspiring to football professionalism.)