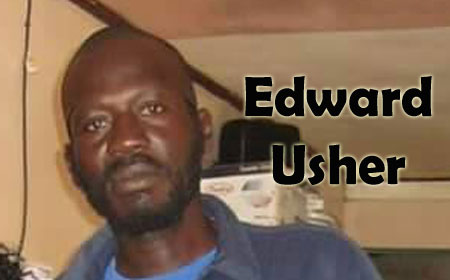 BELIZE CITY, Mon. Apr. 13, 2015–Tensions were high in the Mayflower Street area of Belize City on Saturday following the shocking broad daylight murder of an individual who was well-known in the area and spent a lot of time there.

The incident took place at around 9:20 a.m. on Saturday, April 11, inside a yard that is located at #5 Mayflower Street in the area known as “Ghost Town,” the base of the reputed Ghost Town Crips.

Police said that Edward Usher, 40, also known as “Ghost,” a resident of the area, had just entered the property when he was ambushed by a gunman.

Upon seeing the assailant, Usher reportedly tried to subdue him, but was blasted with a bullet in the neck.

Usher then tried to make his way up the stairs of one of three houses that are situated in the yard, but before he could do so, he was shot twice more in the head and back, which led to his death.

Police responded shortly after and forensics personnel processed the scene while grieving friends and relatives stood watching in anger and disbelief.

They were angered by the fact that Usher, who was known to hang out in the Ghost Town area, was killed well within his colleagues’ turf, which suggests that the killer may have been quite familiar with the surroundings.

Speculations are that the murder may be connected to an ongoing feud that has been brewing between factions of the Ghost Town gang who have been at odds for a while now.

Emotions soon ran wild, and police officers struggled to restrain members of the two groups who clashed near the scene in the wake of the incident as three youths from the area were taken into police custody.

In the meantime, area residents and police alike are on edge due to several threats of retaliation which have been made in reaction to Usher’s murder.

As a result, law enforcement personnel have maintained a presence in the area to try to prevent any such retaliatory acts.

Usher’s mother, Evadne Welch, declined an interview with the media today, indicating that she is still trying to come to terms with the death of her son, whom she described as her “right hand.”

Welch was even more distraught due to recollections of the shooting of her grandson, Malcolm “Frisky” Wagner, 24, who also “hanged out” in the same area, and with whom she had a close relationship, and who had been similarly gunned down while standing at the corner of Flamboyant and Poinsettia Streets, in the same Lake I division, a few blocks from Ghost Town, in Belize City in late June 2014.

One area resident spoke of Usher as a “cool, easygoing and respectful” individual who was not known to get into conflicts.

Police, on the other hand, today said he had had run-ins with the law, and had been arrested and charged in the past for crimes ranging from burglaries to robberies.

Head of Belize District’s Crimes Investigation Branch (CIB), Superintendent Hilberto Romero, acknowledged that there was “some rivalry” between persons in that area, but did not elaborate.

He mentioned that a motive for Usher’s execution has not yet been established, but added that their investigations are still ongoing and that an operation has been launched in the area to address the situation.

Police also said that one person has since been charged for the brazen murder.

Area residents who spoke with the media, however, are doubtful that the carnage that has been unleashed as a result of the ongoing internal gang warfare between the adolescent and elder gang members in the area will let up anytime soon.

Early last month, on the night of March 4, Moses “Malachai” Gonguez, 36, who also frequented the Ghost Town area, was similarly murdered as he socialized with four friends at around 9:30 p.m. at the corner of Mayflower and Vernon Streets.

The alleged shooter, Jervis Valencia, 32, who was shot in the neck and chest by police as he reportedly fled the scene, was later remanded to prison for Gonguez’s murder.

Valencia is also from the immediate area and that incident was linked to a previous conflict between the same group of former associates.