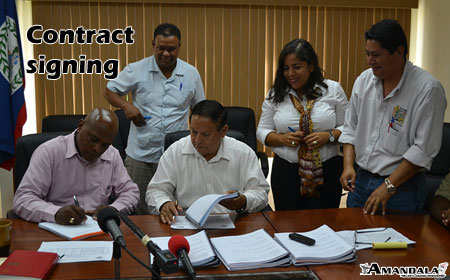 BELMOPAN–The Government of Belize (GOB) signed a total of four contracts for infrastructure projects worth more than $5M as part of an upcoming Flood Mitigation Infrastructure Program aimed at upgrading, cleaning and constructing existing streets and canals on the north-side of Belize City.

The contract signing took place yesterday in the Conference Room of the Ministry of Works and Transport on Power Lane in Belmopan City.

The four contracts, worth over $5M, are for the upgrading of city streets and canals

According to GOB, the projects will include the concreting and lining of the Douglas Jones Canal and the Northside Canal in Belize City, as well as the upgrading of Link Road (Apollo Street), and the construction and concrete-lining of the Bill Lindo Canal in Belama Phases 3 and 4.

Maheias United Construction Company has been outsourced to build a concrete-lined and earthen addition to the Bill Lindo Canal at a cost of $892,250, to be completed in 8 months if all conditions are favorable, while Medina’s Construction Company is slated to build a concrete-lined, covered replacement for the Douglas Jones Canal which will cost $1.8 million and is scheduled to be completed within a period of 10 months.

Medina’s Construction will also carry out cleaning of the Northside Canal, which will additionally be lined with vinyl sheet piles at a cost of $1.9 million, which should be done by July 2015; and Apollo Street, which leads to Belama Phase 4, will be upgraded by M&R Construction at a cost of $1.1 million, and that project is expected to be concluded by next May.

The Flood Mitigation Infrastructure Project is scheduled to end in 2016.