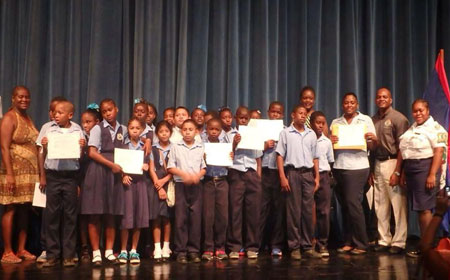 BELIZE CITY, Tues. June 30, 2015–The community policing arm of the Belize Police Department today held a graduation ceremony at the Bliss Center for the Performing Arts for another 464 students from Belize City who took part in its ongoing Gang Resistance Educational and Training (GREAT) program.

Since its inception in 2011, the focus of the gang and violence prevention program – which is facilitated by some 90 trained police officers – has been to provide meaningful intervention for schoolchildren who might be inclined to juvenile delinquency and/or gang membership not only in Belize City, where gangs are prevalent, but also in different parts of the country, since it also addresses the often difficult family life and other personal issues affecting young persons within the primary and high school system.

“It is important that when a student goes through these challenges, there is someone that they can lean on, and that’s our police officers who can assist in helping them to be a better person for tomorrow”, said Officer in Charge of Community Policing at Precinct 2, Eastern Division, Sergeant Brent Hamilton.

According to Sergeant Elroy Carcamo, a key coordinator of the GREAT Program, the program includes four core areas which are aimed at imparting personal skills, resiliency skills, resistance skills and social skills.

The objective of the program, he explained, is to alter participants’ perception about gangs and to help them develop social competency skills, as well as to foster empathy for victims, encourage pro-social affiliation and promote social responsibility.

“Law enforcement intervention and suppression efforts alone are not sufficient to solve the youth gang problem we are facing in our society. Preventing young people from joining gangs in the first place is crucial to realizing a significant and lasting reduction in youth gang activities…GREAT allows police officers and children the opportunity to interact with each other in a more positive way. Basically, it gives the officers the opportunity to change the life of a child or influence the life of a child’s decision to better the community,” Carcamo declared.

The GREAT program is basically a 12-week training course in which students from participating elementary schools undergo lessons within the classroom on how to stay away from involvement in gangs and/or a life of crime through group work and role play sessions. They are also taught one-on-one communication skills as well as techniques in anger management and conflict resolution.

Over 32 schools have been a part of the program so far, and Carcamo encouraged other schools to come onboard, while advising the community to inspire the youth to be productive citizens.

The program is supported by the US Embassy in Belize, and Deputy Chief of Mission for the US Embassy – Belize, Bruce Matthews, mentioned that evidence has shown that the GREAT program has had a positive effect on the lives of children, and that since the facilitators have had optimistic feedback from school educators and their students who have participated in the program, they intend to continue their support for the program nationwide in order to see it expand and be successful.

Two weeks ago, on June 16, 310 students from seven primary schools in the rural Belize District, including Lady of Guadalupe Primary and Pancotto Primary from Sandhill, Saint Therese Primary and Methodist Primary schools in Burrell Boom, and Ladyville’s Seventh Day Adventist, Evangelical, and Lady of the Way RC schools, graduated from the GREAT program.

Roughly 2,000 students from across the country have participated in the program this year, including over 800 from Belize District, which brings the total number of graduates of the program to 8,545 since it started in 2011.