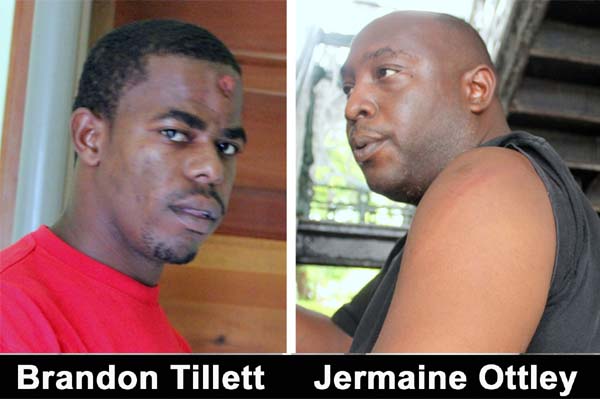 Jermaine Ottley, 35, a resident of #79 Allenby Street, appeared in court today for a drug trafficking case to which he has to answer. Although Ottley is out on bail, he arrived at court this morning courtesy of the police van which brings persons facing new charges from the Queen Street Police Station.

This, according to Ottley, was because while he was getting dressed to attend court this morning, five officers from the GSU arrived at his house and beat him and his friend, Brandon Tillett, 27, aka BET, with such brute force that Tillett had to be taken to the hospital.

In speaking with the media today, Ottley told us that he had done nothing to warrant the savagery of the officers, and there is as yet no evidence to contradict what he said, since there were no charges read to him in court – only an adjournment date given to him.

Ottley also had very visible bruises to support his allegations of brutality by the officers.

But while Ottley was transported to court this morning, his friend, Tillett, had to be taken to the hospital for treatment and didn’t appear in court until this afternoon.

When Tillett did arrive at the courthouse, there was a hard-to-hide bulge on his forehead, which appeared to be a fresh abrasion.

Tillett, for his part, was taken before Magistrate Dale Cayetano, where three charges were read to him, and he pleaded not guilty to all of them. He was charged with wounding PC #560 Abner Itza, resisting lawful arrest by PC Jian Young, and assaulting a police officer, namely PC Itza.

Attorney Bryan Neal appeared on behalf of Tillett, who asked that the court take note of the condition of his client, and when asked by the magistrate why he looked the way he did, Tillett responded that he had been beaten up by police.

Tillett told the court that he went to Ottley’s house to borrow some DVDs, and while he was there, there was a knock on the door and he heard someone say “police”.

He said that when he opened the door, he saw PC Itza standing at the door, and another officer came in and punched him in his face. He said he was viciously beaten by three officers, and after about two minutes, they stepped back and one of the officers was observed bleeding.

He said that that was when the beating got worse, because he believes that the officers thought he was the one who caused the injury to the officer.

Tillett, however, strongly denied that he was responsible for the officer’s injury in court, telling the magistrate that he had been busy covering up his face and body with his hands in an attempt to block the blows.

When asked if he had been examined by a doctor, Tillett said he had, but that the same GSU officers took away the medico legal form that the doctor filled out and burned it.

There was no objection to bail, and Tillett was offered and met bail of $2,000 and one surety of the same amount. He is expected to appear back in court on September 18, 2013.