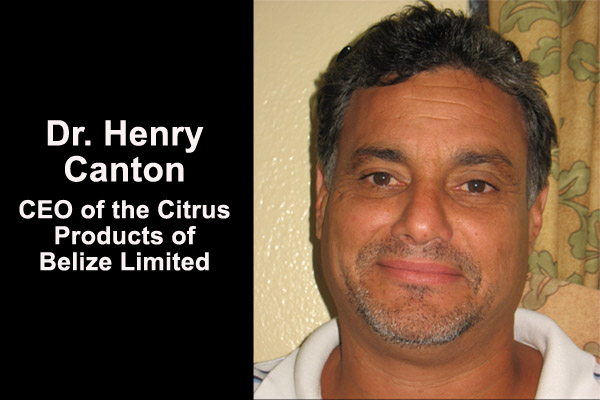 Today, the United Democratic Party’s (UDP) party organ, The Guardian newspaper, boldly headlined an article which suggested that the current Chief Executive Officer (CEO) of the Citrus Products of Belize Limited (CPBL), Dr. Henry Canton, has been fired from his position.

Amandala, however, was told by the new Chairman of CPBL’s Board of Directors, Doug Singh, that no such thing happened, and that, as a matter of fact, Canton is still CPBL’s CEO until further notice, because no decision has yet been taken in regards to Dr. Canton’s 12-year tenure.

Singh made it clear that while the fate of the CEO is being contemplated, he has not been fired and indicated that the public will be notified via a press release if there is any change in Canton’s status.

“Mr. Canton has not been terminated from his position because he is still presently the CEO of CPBL,” Singh told us.

According to the Citrus Growers Association (CGA), Canton’s tenure has been a source of controversy over the years after he was installed as CPBL’s CEO by the Barbados-based Banks Holdings Limited –which is one of two majority shareholders for CPBL – especially considering the fact that his position was buttressed by an Investment Agreement which gave Banks Holdings the power to make that decision.

Over the last few years, the CGA, which is the other majority shareholder, has tried relentlessly but unsuccessfully to have Canton removed from his post.

Back in February of this year, the Government intervened when the contentious relationship between Banks Holdings and CGA threatened to bring citrus production to a screeching halt when citrus farmers were delivering produce, but not getting paid.

At the time, the stakeholders in the citrus industry held two joint press conferences while the principals were trying to restore the situation to normalcy, and one of the burning questions was whether Canton would be fired. Prime Minister Dean Barrow, however, mentioned that the matter would be dealt with by the newly appointed Board of Directors.

Under the modified Memorandum of Understanding (MoU), that Board consists of two persons who were nominated by the Belize Citrus Growers Investment Company and two individuals from Banks Holdings Ltd., while the other stakeholders, which include Heritage Bank, the Social Security Board (SSB) and the Government of Belize (GOB), each had the right to nominate one person to serve on the CPBL Board.

The Guardian implied that while Canton has been fired as CEO, he would remain on the newly constituted CPBL board as one of the two directors representing Banks Holdings.

While the article claimed that Canton’s firing was finalized yesterday evening, Singh told us today that the matter is still up for discussion and that negotiations continue with the embattled CEO.

Dr. Canton has been CEO of CPBL since 2002. Our attempts to speak with him have been unsuccessful.

In related news, Amandala understands that the Citrus Growers Association will hold a special Annual General Meeting this Saturday at their headquarters in Pomona at 10:00 a.m. to discuss the Dr. Canton issue, among other issues.