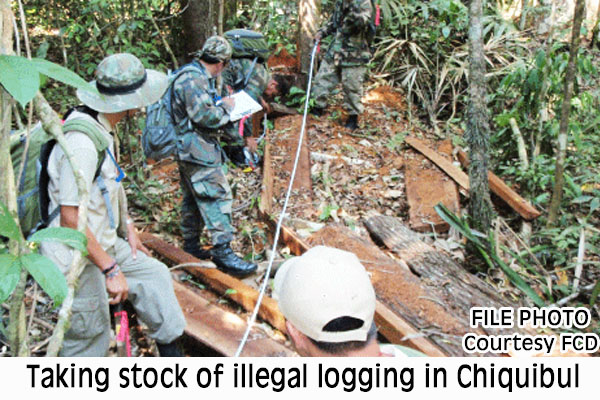 The problem of unchecked incursions inside Belize’s prized Chiquibul Forest, particularly inside the Chiquibul National Park, and the clear and present danger these incursions pose—not just for Belize security forces but also for Guatemalan campesinos who exploit the area for illegal farming and other illegal activities—came into sharp focus again over the weekend with the killing of Tomás Desdicho Ramírez, 29, of San Marcos, Petén, Guatemala.

Belize Prime Minister Dean Barrow and Guatemala president Otto Pérez Molina, who issued a joint statement today, agree on one thing – that the incident happened inside Belize, but the question now is whether the Belizean military officer who shot Ramírez was “culpable” for the death—or whether he was justified in shooting Ramírez.

Belize police said that Ramírez, who was allegedly found armed with a Maverick Mossberg Model 88 12-gauge pump action shotgun, was shot in the upper right side of his body, his abdomen and right leg.

Belize police have told Amandala that Ramirez’s body arrived in San Ignacio at around 8:00 a.m. yesterday, Sunday, and it was positively identified by officials from the Embassy of Guatemala in Belize. A post-mortem was scheduled for Monday afternoon.

Ramírez and his brother, Feliciano, who apparently escaped unharmed, were reportedly farming corn and pumpkin seed, but Belizean authorities report that marijuana seeds were also confiscated where the Ramírez brothers were found.

Indications to our newspaper are that the milpa incursions into Belize are actually engineered by big business, as we will discuss later in this article.

Rafael Manzanero, executive director of Friends for Conservation and Development (FCD), said that the incident happened inside the Chiquibul National Park, over two miles from the Belize-Guatemala border at a place known as Cebada, which he described as a “danger zone” because of the very high risk of running into armed Guatemalans. Manzanero told our newspaper that recent aerial photography shows that this is a “very active zone…” with multiple incursions.

FCD has been sounding the alarm for several years that the Chiquibul has been targeted by Guatemalan campesinos for its rich natural and mineral resources: Belize’s national tree – the mahogany and cedar woods, xáte palm, parrots, game, and other wildlife, and more recently, its gold. Hundreds of Guatemalans are deemed to be operating illegally inside Belizean forests on a daily basis, according to FCD’s estimates.

While the Governments of Belize and Guatemala issued an unprecedented joint statement on this weekend’s shooting incident, that release nowhere addressed the problem of escalating incursions into Belize by Guatemalans.

However, the official statement said that, “The Prime Minister of Belize and the President of Guatemala reiterated their commitment to the maintenance of peace and the promotion of friendly relations between both peoples and rejected any form of use of force to resolve any differences between the two countries.”

Belize has also committed to an investigation of the case, and has invited the Guatemalans to lend “support” to that investigation.

“The Prime Minister of Belize and the President of Guatemala have been in telephone contact on the regrettable incident. The Prime Minister assured the President that his government will investigate the facts relating to the incident and should it be found that there is culpability by persons involved, they will be brought to justice in accordance with the law. The Government of Belize is committed to full transparency in this process, and offers to share the reports with the Government of Guatemala,” the joint statement said.

But Belize police indicated this morning that their investigations have revealed that “…a patrol of Forestry officers, police and BDF personnel were some 7 kilometers north of Rio Blanco and some 3.4 kilometers east of the border line when they encountered some armed male individuals.”

The police added that, “They were ordered to stop and in doing so, they opened fire at the authorities, who returned fire and it resulted in one being fatally injured.”

According to the official Government statement, Barrow had also invited Guatemalan authorities to participate in Ramirez’s medical autopsy. Belize and Guatemala have requested the support of the OAS to assist in the investigation process, the parties said.

Although Guatemala’s Prensa Libre, whose reports on such incidents have often been inaccurate, has claimed that the Guatemalan was shot by the BDF inside Guatemala, at San Marcos, the official statement on the incident confirmed that the incident happened inside Belize.

Belize police report that Ramirez wore a red T-shirt and a long-sleeved white shirt with blue stripes, a pair of faded black long jeans, and a pair of rubber boots.

According to police, the deceased was armed with a Maverick Mossberg Model 88 12-gauge pump action shotgun with serial number MV68090L, which was retrieved from him.

They said that a plastic bag containing 171.1 grams [roughly a half-pound] of cannabis seed was found nearby, and one live 12-gauge and 5 expended cartridges of 12-gauge were also recovered from the scene.

Of note is that illegal milpa farming is done on an annual cycle – which means that it happens every year around this time, in places such as South Chiquibul. Manzanero said that similarly to what was reported in the Caracol zone, the Guatemalans put down surveying lines, marking where they will plant – which, he said, demonstrates that the planting is not random, but highly organized.

Manzanero told Amandala that the FCD has two major concerns: one, that illegal milpa farming is increasing and it is more prolific now than ever – and two, that there are more drug plantations in the area, which is a major security concern for them.

He said that Prime Minister Dean Barrow, who heads the National Security Council, had indicated that three new observation posts would be put out west, and they hope that Cebada—which Manzanero notes is the most critical spot—will be included in the plans as a top priority.

Based on reports we have been receiving from FCD over the last five years, the encroachments at Cebada have been increasing drastically. In December 2008, the FCD said that there were “indications” of illegal farming across the rugged terrains of the Cebada zone, with illegal burnings documented in March/April.

In 2009, FCD reported that clearings at Cebada and Valentin Camp had expanded from an acre to about 10 acres over the course of the year.

Then in 2011, Manzanero noted that parts of Belize that had not previously been exploited by milpa and other incursions were then being accessed, with incursions increasing at Cebada—which contains one of the entrance points of the Chiquibul Cave System—based on satellite imagery.

The latest assessment was done on Sunday, when FCD did another satellite surveillance of the area, and found that the Guatemalans are embarking on yet another cycle of illegal milpa farming inside Belize. Manzanaero said that the Guatemalan campesinos have already begun burning vegetation on the Belize side of border, in order to clear spaces for planting.

Whereas Saturday afternoon’s crossfire has resulted in the death of a Guatemalan farmer, Manzanero said that it’s been years since a fatal incident like this has occurred inside the park.

Last October, after Belize security officers came under fire in the Chiquibul, Belize Minister of Foreign Affairs and Foreign Trade, Attorney General Wilfred “Sedi” Elrington, said at the General Debate of the United Nations General Assembly, convened in New York City that “the forays” into Belizean territory are “an existential threat” which require urgent resolution and action on the international front.

Elrington noted that, “There are some 65 Guatemalan villages along the 141-mile Belize-Guatemala border. These—the villagers – are largely indigent and unemployed. In the absence of employment, and increased security patrols on both sides of our borders, the incursions by the Guatemalans will not, in our view, abate, but will only get worse.”

The reports of armed incursions and crossfire between Belize security forces and Guatemalans coming to Belize to exploit natural and mineral resources have been numerous: just last week we reported on the arrest of two armed Guatemalans found inside the Chiquibul National Park.

In September, Belizean security officials nabbed a Guatemalan of Monte los Olivos—while another escaped—and charged him for illegal entry and gold panning.

Then in June 2013, Belizean military reported that they had come under fire while on patrol in the Chiquibul Forest Reserve and had, as a consequence, shot a Guatemalan in the crossfire. That Guatemalan was Edgar Alveno, who had to be hospitalized in Belize for treatment.

Whereas none of these incidents proved fatal, the shooting of Francisco Quin Yat of Monte Los Olivos, reported in October 2012, did – and his killing ended with the Government of Belize paying US$10,000 to the family of the deceased towards burial costs, as a “compassionate” payment.

Only months earlier, in July 2012, Luis Alonzo was killed during what was reported as an armed confrontation with illegal loggers inside Belize.

However, the last major flare-up happened back in February 2012, when Guatemala president Otto Pérez Molina demanded an “exhaustive investigation” into the shooting death of Juan Choc Chub, 29, which the Guatemalans portrayed as a significant human rights violation. Molina had said that those responsible should be brought to justice and these incidents ought not to continue.

At the time, Pérez had said that Chub’s killing happened at Monte de los Olivos, Dolores, Peten, while Belize maintained that it happened inside the Chiquibul, on the Belize side of the border.

Against the backdrop of these border incidents is the proposal for Belize and Guatemala to resolve what Belizean officials still deem to be that country’s unfounded claim over half of Belize’s territory, at the International Court of Justice (ICJ).

In their joint statement today, the countries said: “They also reaffirmed their commitment to submit their territorial, insular and maritime dispute to the International Court of Justice in accordance with the Special Agreement of 2008.”