Guatemala, Belize, and the ICJ: The Big Picture 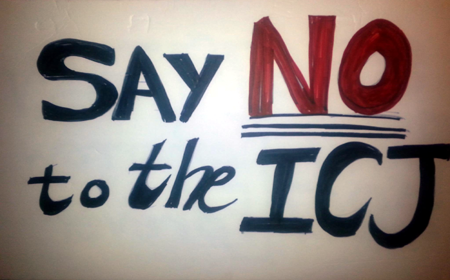 I am addressing this brief message to ALL Belizeans, wherever they may be and irrespective to which of our three political parties they belong, or, like myself, owe allegiance to none.

Belize’s going to the International Court of Justice (ICJ) in any case with Guatemala is NOT the option Belize should adopt. The people of Belize must resoundingly tell both the UDP Government and the PUP Opposition on Wednesday, 10th April, 2019  –  NO.  Why?

1. Guatemala, as against Belize, has assembled the best team in the world of renowned, world-class and tried and tested international lawyers, historians and international politics specialists its extensive war chest has purchased. Guatemala has been in a state of calculated preparedness for many years. And, I state this from a position of knowledge. Belize does not have that advantage. Belize, should it make the irrevocable error of going to the ICJ, would be employing mere bows and arrows against an adversary equipped with an arsenal of ballistic missiles. This is not about David and Goliath, but the unfair world of realpolitik.

How did  Belize’s government’s legal team fare not so long ago against that of Lord Ashcroft’s various lawyers at different points in time? Generations of Belizeans, yet unborn, will be saddled with the enormous debt, that will take much of our nation’s resources, to pay this man. Yet much of this debacle had its roots both in the UDP and the PUP dining with the devil and using their fingers to eat, instead of a very long spoon, or better still, refusing to dine with Satan.

We must stop being naive, over-confident, and in fact, stupid.

2. Even if Belize wins its case, because ICJ decisions are not enforceable, might, and not right, at times wins in the end. It is a known fact that the ICJ is the United Nation’s LEAST EFFECTIVE body. Big and powerful nations, when they lose at the ICJ against smaller and weaker ones, usually ignore its judgments. There are several instances of this. One which comes to mind is that of the US and Nicaragua. To this day, the US has paid no reparations to Nicaragua’s Sandinista government. Not only the US, but nations such as China and Japan have flouted ICJ rulings that went against them. Guatemala’s diplomatic footprint is far larger than Belize’s. With powerful allies such as the US and Israel, Guatemala can and will thumb its nose at an unfavourable ICJ judgment. That is when the “yes” Belizeans will know who their real friends are.

3. Belize is the only party in this case that has something to lose; which is 53 per cent of its territory. Think! Why litigate and gamble with what we already have, even if we have a “water-tight” case? Conversely, Guatemala is the only party here which has nothing to lose and something to gain. Guatemala is therefore trying its luck in a high wire gamble, all in the hope that it gets what it knows does not belong to it, but whIch it has been lusting for, for the last couple of centuries.

4. Should Belize lose, to which higher court does it lodge an appeal? The ICJ has no appeal process. Is Belize in any military, economic, or strategically diplomatic position to ignore an adverse judgment, and stubbornly refuse to cede one inch of its territory to a victorious and predatory Guatemala?

5. The reason why Guatemala’s political, military and economic elites are hell bent on forcing Belize’s political and economic elites to influence the Belizean electorate to vote “yes” to an  ICJ “solution” (which I maintain is going to be no solution, irrespective of the nonsense bandied around), is because the former knows that the latter is not only profoundly self-serving, but uncannily similar to it. Both the Guatemalan and the Belizean elites care not one whit about  the fate of their people. At the end of the day, it’s all about money  –  nothing more, nothing less. Think, my people of Belize. Think!

Guatemala’s power brokers and their collaborators in Belize also realise that the “real” Belizeans are incapable of managing Belize and its “wealth untold”, hence the scandalous large-scale sale and dissipation since the mid-1980s of everything of value in our country to foreigners and their local cohorts, who now call the shots throughout our nation-state. See how the introduction of the miserable sum of just $8 million by the so-called “Friends of Belize”, may unfortunately change things in the voting equation next year.

For those fervently beating the “yes” drum, I pray they are able to find another “sub umbra floreo” when the time comes.

* The writer resides in Lagos, Nigeria