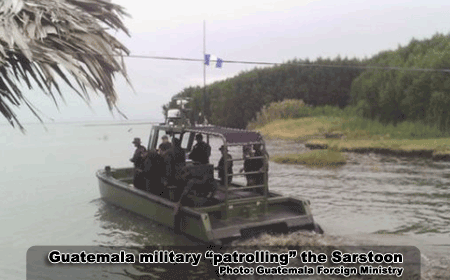 BELIZE CITY, Mon. Mar. 14, 2016–Guatemala’s Ministry of Foreign Affairs issued a statement today in which it made the bold-faced assertion that it “…reaffirms once again that the Sarstún River is Guatemalan…” The statement was in answer to the Government of Belize’s Sunday press release in which it confirmed yet another incident between Belize and Guatemalan armed forces.

The official Guatemala release added that if the differendum between the two countries is not resolved definitively by the International Court of Justice, Guatemala would continue to “exercise and defend their sovereignty [at the Sarstoon], as it is now doing.”

On Sunday, the Government of Belize said, via a press release on Facebook, that “a confrontation between Belize Security Forces [the Belize Defence Force] and Guatemalan Armed Forces [GAF] occurred late Saturday evening at the Sarstoon in the area of Belize’s Forward Operating Base [FOB].”

It added that, “The GAF approached the FOB, though they never actually attempted to come on to our land, and behaved in an extremely hostile and threatening manner, insisting that our troops should not be at the Sarstoon.

If the ICJ doesn’t rule in Belize’s favor, Guatemala says, it will continue to “exercise and defend their sovereignty [at the Sarstoon], as it is now doing.”

“The Belize Forces stood their ground and after some time the GAF withdrew. In the intervening period the BDF Commander General Jones had spoken to an opposite number in Guatemala and Prime Minister Dean Barrow had sent a message to President Jimmy Morales.”

The Guatemalan Foreign Ministry suggests that the Belize account is a lie; it suggests that it was the BDF that was in the wrong.

The Guatemalan Ministry of Foreign Affairs claims that on Friday , March 11, a BDF vessel, “without following the security protocol commonly used in the Sarstoon River… entered inland waters of Guatemala, in the river mentioned and sailed the south of the same bank.”

It added that on Saturday, March 12, it radioed the BDF vessel in the area to insist that the crew follow “safety protocols commonly used in the Sarstoon River…” The Guatemalan ministry said that the BDF crew insulted the GAF when they spoke of the destruction of a fish net (trammel) belonging to a Guatemalan in the area.

The Guatemalan Ministry of Foreign Affairs statement claims that they did not provoke the BDF, as Belize has said in its statement. It said that they merely insisted that the BDF adheres to “safety protocols,” commonly used in the Sarstoon River.

It disputes assertions by the Government of Belize that GAF were “extremely hostile and threatening” towards the BDF.

Reports of GAF aggression against BDF soldiers are nothing new—but in its statement Sunday, the Government of Belize said that tensions are at an all-time high. Incidents reportedly abated after 2006, but were said to intensify thereafter.

In 2009, it had been reported that the Guatemalan flag, which appears on the GAF patrol vessel in the photo published today by the Guatemala Ministry of Foreign Affairs, was flown on the Belize side of the river.

Last year, reports surfaced that BDF soldiers who make routine change-overs of detachments at Cadenas, usually on Tuesdays, were being persistently impeded by GAF soldiers.

Of note is that although Guatemala continues to persist on the ICJ route of resolution, it has not yet disclosed how much of Belizean territory it would ask the International Court of Justice to decide upon. Furthermore, the electorates of Belize and Guatemala would, under the terms of the special agreement signed in 2008, have the final say on whether the ICJ route of resolution is to be pursued in the first place. The simultaneous vote was initially slated for October 6, 2013; but was postponed after Guatemala pulled back.

When Guatemala’s presidential elections were held last year, they had gotten Belize to sign amendments to the special agreement to allow that country to hold its referendum, separately from Belize, at the time of their elections. However, that never happened.

Now Guatemala’s Foreign Ministry is saying that it will occupy the Sarstoon—as long as there is no definitive resolution by the ICJ.

Guatemala’s long-held mantra is “Belice es nuestro”—an assertion which Belize flatly rejects on the basis of the 1859 Boundary Treaty. That country’s unfounded claim is said to at least include the Cayo, Stann Creek and Toledo Districts, all the way up to the Sibun River in Central Belize—although the Guatemalan Foreign Affairs statement issued this morning limited its assertion to the Sarstoon. In fact, official communications from Guatemala have said that that country reserves the right to claim ALL of Belizean territory.

The territorial differendum predates Belize’s independence of 1981. It is noteworthy that even before Belize obtained its independence from the UK, the United Nations passed a series of resolutions that call for this country’s independence with its peace and security and “with all [Belize’s] territory intact.” That territory is defined on international maps by a line running midway down the main channel of the Sarstoon, which takes the line south of the Sarstoon Island.

On Thursday, May 28, 2015, GAF soldiers attempted to eject Belize Coast Guard officers off the Sarstoon Island while the Belize security officers had gone to scout the area for a good location to build a Forward Operating Base. The Belize contingent was able to produce a map to support its position that the island is well within this country’s territory and stood its ground until called back by National Security chair, Prime Minister Dean Barrow. The Government of Belize has since proceeded to build the FOB on the northern bank of the Sarstoon River.

In March 2010, GAF members stopped a BDF unit which was on the southern channel, but inside Belizean territory, and ordered the Belizeans to use the northern channel, north of the Sarstoon Island.

The multiple protest notes sent challenging GAF’s actions have not curbed the harassment by GAF soldiers. In fact, on Saturday, February 27, five GAF vessels with armed soldiers and Immigration authorities blocked the Belize Territorial Volunteers from freely using the Belize portion of the river to visit the Gracias a Dios marker in southwest Belize. It was reported last week that the Government of Belize had since sent off a protest note to Guatemala. The apparent response to that note was this weekend’s Sarstoon incident.

Belize will respond with another “strongly worded protest note.”

Meanwhile, on the diplomatic front, the parties are due to meet at the headquarters of the Organization of American States (OAS) in Washington, DC, tomorrow, Tuesday, March 15.