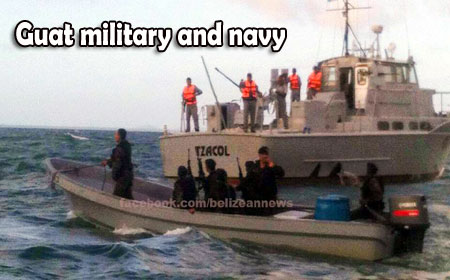 BELIZE CITY, Thurs. Feb. 25, 2016 Wil Maheia, founder of the Belize Territorial Volunteers (BTV), released a video message today taking umbrage with an advisory from the Government of Belize calling on Belizeans not to go to a BTV-sponsored expedition on the Sarstoon River this weekend, following what appear to be threats from Guatemala’s military.

The BTV announced on Monday, February 22, that it is organizing a trip to the Gracias a Dios border monument in southern-western Belize, “in commemoration of the fateful day when Belizeans were detained by Guatemalan Military a year ago when they went on an educational trip to the monument.” The BTV extended an invitation to the public and media to join them on the trip, slated for Saturday, February 27—but a Ministry of Foreign Affairs official says it is a bad idea that will only lead to “misadventure.”

In a release issued today the Belize Ministry of Foreign Affairs expressed “grave concern about the inherent danger in the course of such activity.”

On Wednesday Maheia told us that he had been advised by the Ministry of Foreign Affairs not to go back to the Sarstoon, because the Guatemalan Armed Forces (GAF) had called to warn the Ministry earlier that day. According to Maheia the BTV has been told not to go on the excursion as “everybody will be detained if we go.”

Foreign Affairs CEO, Lawrence Sylvestre, had advised them that the Guatemala military in charge of the Izabal region had called to say words to the effect that “those guys had better not get on that river.”

Refusing to back down from his plans, Maheia asserted that they will be on the Belize side of the Sarstoon border. Still, he was told that it does not matter, and that Belize does not have the military might to stop the Guatemalans.

Last week CARICOM Heads of Government who met in Belize said in their communiqué that they “…reaffirmed their unequivocal support for the maintenance and preservation of Belize’s sovereignty and territorial integrity.” Via the communiqué, they also urge Belize and Guatemala to continue “constructive engagement and building of friendly relations for the betterment of their peoples.”

Maheia questioned why CARICOM had not pledged its support for Belize’s position at the Sarstoon and furthermore, why CARICOM had not chastised Guatemala and called on that country to “leave our people alone.” He said that he is disappointed that the Government of Belize has succumbed to Guatemala and has not protested to the international community against the bullying by Guatemala.

Mr. Maheia said that they were also advised that the Sarstoon area is not covered under the Confidence Building Measures between Belize and Guatemala, which were drafted under the auspices of the Organization of American States(OAS), and that it could take “months or years” to free them if they are detained by the Guatemalans.

Amandala has been told that the Guatemalans have hardened their position since the face-off between GAF officers and the Belize Coast Guard on Thursday, May 28, 2015, when GAF ordered them off the Sarstoon Island, which is squarely inside Belizean territory, forcing the Coast Guard to abandon their mission to build a forward operating base in the area to check illegal activities. We understand from a well-placed source that the Guatemalans are now insisting that the whole of the Sarstoon River is theirs, and this escalation, we understand, appeared to have been more recent.

“This is bigger than the Sarstoon Island. They said all of it is theirs and they will not allow the Belize Defence Force (BDF) to go in…” our source, who is a former government official, said.

At the annual conference of the Belize Bar Association last Friday, BDF Commander, Brigadier-General David Jones, warned that there is potential for the exchange of gunfire. Jones stressed that there will be possible confrontation at the Sarstoon, as the Guatemalans have indicated that as far as they are concerned the entire Sarstoon is for Guatemala. The BDF have reportedly been hindered in their operations in the Cadenas area, in the extreme south of Belize, and the fear is that unless officials from Belize and Guatemala are appointed to deal with the matter and establish a mechanism for peaceful engagement, major problems could arise.

The Ministry of Foreign Affairs said in today’s advisory that “…there are areas in the proximity of our western and southern borders which are prone to generate tensions between the citizens of the two countries, and, in the circumstances, the Ministry maintains its view that it is imprudent and potentially dangerous for the organizers of excursions of this type to expose innocent Belizeans to the risk of inadvertently coming into conflict with Guatemalans—be they civilians or officials.”

In a phone interview with our newspaper today, CEO Sylvestre said the Ministry is concerned about the BTV’s plans to go back to the Sarstoon, one year after a Belize-registered motor vessel with 37 civilians was held by Guatemalan armed forces and escorted to Izabal in Guatemala.

Sylvestre said that “these areas are still subject to an active territorial controversy between Belize and Guatemala, and we are in a highly sensitive time.”

“It will only result in misadventure; it will only scuttle what we are trying to do,” Sylvestre said, referring to the planned expedition as “provocative to the other side”—meaning Guatemala.

Sylvestre said that the Belize security forces—the BDF, police and Coast Guard—are trying to deal with the situation, and he has “heard of situations where even [official Belize] patrols are being challenged by elements of the Guatemalan Armed Forces.”

“I wish to appeal to Belizeans to stay out of the area and to assure them that the assertion and maintenance of sovereignty over our side of the river is best left to our official authorities and our security forces,” Sylvestre told us.

Sylvestre said that Wil Maheia and the BTV are trying to provoke an incident, while the Government “is trying to peacefully settle a claim using diplomacy,” as, Sylvestre said, Belize and Guatemala have agreed to settle the matter at the ICJ.

He said that he is now calling on Maheia to join Government’s efforts at educating Belizeans and making them aware of and confident in the certainty of Belize’s position in what is a legal dispute.

He pointed to conflicts with the GAF and Belizean civilians on two instances: on February 28, 2015 and again in August, despite their “best efforts at having GAF exercise restraint” through then president Otto Perez Molina; yet, he said, GAF responded aggressively.

“Only yesterday, commanders of the BDF and their counterparts met in a routine commanders’ meeting and the sense we are getting is that they will assert Guatemala’s claim to their side of the river,” said Sylvestre.

He went on to say that Guatemala has repudiated the 1859 treaty, which documents the parameters of Belize’s border with Guatemala, and now, he said, “they are claiming everything… all the way up to the Sibun, and all the cayes, except St. George’s Caye.”

“They have detained people before. Now it is not a former army strongman running Guatemala [speaking of Molina]. [The new president] Jimmy Morales is not from the establishment. His party only controls 14 or 16 seats of 168 in Congress,” Sylvestre said.

He also told us that there is presently a Belizean contingent in Washington meeting with Guatemalan representatives who are looking at implementing a set of 13 bilateral agreements penned by Belize and Guatemala in Placencia last year, and they would not want anything to happen to jeopardize that.

We asked Sylvestre, given all that was said, whether Belize security forces will be in the Sarstoon this weekend when the BTV makes its trek to Gracias a Adios.

“Our security forces have always had a presence in the Sarstoon. There will be nothing different on [Saturday],” he said, adding that the Government is proceeding with the construction of its forward operating base at the Sarstoon for joint security services by the Coast Guard, BDF and Police.