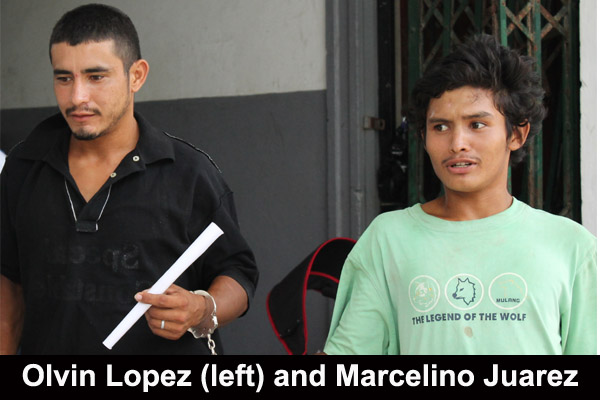 Olvin Lopez, 24, and Marcelino Juarez, 18, appeared in Belize City Magistrate’s Court today, Tuesday, where they were both found guilty of illegal entry into Belize and deemed to be prohibited immigrants.

Juarez, a Guatemalan, was a construction worker residing at a Mahogany Street address in Belize City. He pleaded guilty to the charge read against him and agreed to the facts of the charge read in court. A removal order was issued for his deportation to Guatemala at a time to be determined by the Director of Immigration.

Juarez was handed over to immigration officers today from the Queen Street Police Station. The immigration officers escorted him to the Immigration office for questioning. The officers requested from Juarez his passport or any other form of travel documents, which he was unable to produce. He was therefore deemed to be a prohibited immigrant. Juarez has been in Belize since December 2010, when he entered Belize via the banks of the Mopan River in Benque Viejo del Carmen.

Lopez is a Honduran who was also working in construction and resided at a Belize City address. He pleaded guilty to his charge and agreed with the facts read to him in court. Lopez was fined $1,000, plus $5 cost of court, which were to be paid forthwith, or he would serve six months in prison. A removal order was issued for him to be deported to Honduras and would take effect after he pays the fine or serves the six-month sentence.

Lopez was handed over from the Racoon Street Police Station to immigration officers on July 15, 2013. He was taken to the Immigration office for questioning and checks were made at the Belize Western Border station, where there were no records of Lopez’s entry into Belize.

Lopez entered the country on July 7, 2013 by way of the banks of the Mopan River in Benque Viejo del Carmen. Hence, he was deemed to be a prohibited immigrant and charged for illegal entry into Belize.