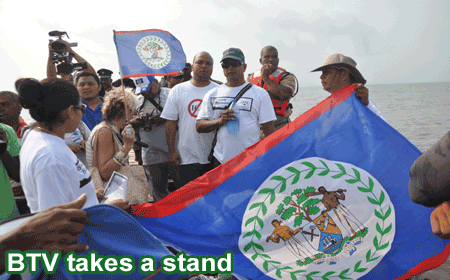 BELIZE CITY, Fri. Apr. 29, 2016–Meetings were held yesterday, Thursday, in Punta Gorda Town between government officials from the Ministry of National Security and the Ministry of Foreign Affairs, who attempted to persuade the Belize Territorial Volunteers (BTV) leader, Wil Maheia, not to go to the Sarstoon River to celebrate the signing of the 1859 Anglo-Guatemalan border treaty. Following the meeting, Maheia insisted that the BTV trip was still on.

Today, the government respondedlegislatively when it hastily passed Statutory Instrument (SI) 46 of 2016, effectively amending Section 2, Chapter 142 of the 2011 Public Safety Act of the Substantive Laws of Belize Revised Edition 2011.

The Public Safety (Prescribed Area) (Movement) (Restriction) Regulations, 2016 seeks to prevent Belizeans from going, “without lawful authority,” to the Belize side of the Sarstoon River, beginning at its mouth, and including Sarstoon Island. The SI is a prohibition against individuals who intend to “(c) carry out or threatens to carry out any act of intimidation, violence or other disorderly conduct within, or in relation, to the prescribed area.”

The law is for one month and the penalty for its violation is a fine of $2,000 or imprisonment for 12 months; however, both a fine and imprisonment can be imposed.

Government issued the press release, captioned “Government of Belize places temporary restrictions on movement in Belize’s portion of the Sarstoon River,” to inform the public of the SI.

“Government advises that this course of action has become necessary in order to prevent any ‘commotion’ or ‘threat to public safety’ that might arise in consequence of the continuing tense and dangerous standoff between Belize and Guatemala over the Sarstoon, and the tipping point that could be caused by unregulated insertion of members of the Belizean public into this volatile mix,” stated the release.

The release ended saying, “During the one-month period for which the restrictions are to last, it is expected that a diplomatic solution will be found to the problem, and that the solution will provide for safe passage of Belizean civilians along the Sarstoon River.”

On Monday, April 25, however, Prime Minister Dean Barrow had told the nation that tension between Belize and Guatemala had “eased,” a statement later refuted by the Guatemalan Foreign Minister.

This afternoon Amandala spoke with Wil Maheia via telephone to get his reaction to the government’s SI, which, without a doubt, was targeting the BTV’s planned anniversary celebration for tomorrow.

Maheia said that he was disappointed that such a law has been passed. When will the government enforce the laws against the Guatemalans, he asked.

Amandala asked Maheia if he would still lead the BTV to the Sarstoon River, given that the government has now made it a punishable offense to go to the Sarstoon.

“As it is right now, we are still going tomorrow,” Maheia replied.

You know that you and your group are risking arrest if you insist on going, Amandala told Maheia.

Maheia, the undeterred nationalist, shot back, “I won’t be the first man to be arrested for what I believe in.”

Then he added, “I think the PM is misinformed. I find his statement to be insulting and ridiculous. All we are asking for is to maintain sovereignty over our 8,866 square miles.”

The BTV, which has had more than one encounter with the Guatemalan Armed Forces on the Sarstoon River, had been hammering into the consciousness of Belizeans that Guatemalan fisherfolks have been violating Belize’s fisheries regulation by the use of gill nets in the river, under the ever watchful eyes of the Guatemalan military.

Indeed, the Republic of Guatemala, in its not so diplomatic pronouncements, has, on more than one occasion, stated that it is exercising sovereignty over the entire Sarstoon River, and recently rejected Belize’s 11-point proposal for protocols to govern the operations of the two countries’ military forces on the river. Guatemala has been insisting that the Belize Defence Force check in with them when they are going up the river to change the guard at Cadenas.

The government’s SI has been met with blistering criticism from the Opposition, the People’s United Party, (PUP) which issued a press release today saying that it was appalled by the government’s announcement today and described the government’s action “as an act of cowardice”. The PUP went on to call on the government “to immediately rescind the unpatriotic regulation.”

The PUP release said, “Leader of the Opposition, Hon. John Briceño, informed Prime Minister Dean Barrow at a meeting this morning that the PUP does not support this draconian measure. The PUP views this as a retrograde and highly prejudicial step for the following reasons: ‘In the face of Guatemala’s assertion of sovereignty over the entire Sarstoon River, the introduction of this regulation with the specific objective of preventing Belizeans from entering Belize’s portion of it, the Sarstoon, may be viewed in law as acquiescence by Belize to Guatemala’s assertion of sovereignty over the entire Sarstoon.’”

“The regulation, in the face of growing Guatemalan belligerence and aggression, will only serve to embolden Guatemala and harden its resolve to assert sovereignty over the entire Sarstoon.,” the release further stated.

The PUP further remarked that, “It is an act of cowardice by the Government to threaten, through the regulation, to arrest and fine patriotic Belizeans who wish to exercise their constitutional right to move freely and peacefully in Belizean waters when Guatemalans illegally pour over our Western border every day, committing a range of illegalities and damaging our environment.”

The release also noted that, “The Government of Belize has wholly failed to take into consideration that the livelihood of a large number of Belizean villagers depend on the ability to freely navigate our portion of the Sarstoon River without having to obtain prior permission from anyone.”

“Since the BTV has issued a Declaration of Peace and has prepared a Code of Conduct for participants to sign, it is fiction to say that there could be any threat to public safety in Belize by members of the BTV. The only threat to public safety will come from Guatemala. The legality and constitutionality of the regulation is highly suspect,” the PUP commented.

The grassroots organization, Citizens Organized for Liberty through Action (COLA), came out swinging against the legislation.

In its press release issued today, COLA, like the Opposition, accused the government of cowardice. COLA also called for a national shutdown in its release.

“The Government of Belize’s latest action to pass a ‘knee jerk’ law that prohibits citizens from going into the Belize’s portion of the Sarstoon River is a gross act of cowardice.

“This latest action proves the government’s lack of priority as it relates to the issue of national sovereignty and territorial integrity. Instead of ensuring that illegal encroachments come to halt, the government seeks to muzzle its citizens’ right to free movement in its own country,” said the release.

COLA called for a national shutdown, although it did not elaborate on how this would be done.

“For far too long Belize has lacked true leadership as it relates to this issue and it is time for the citizens of Belize to rise up and demand better,” the COLA press release said.