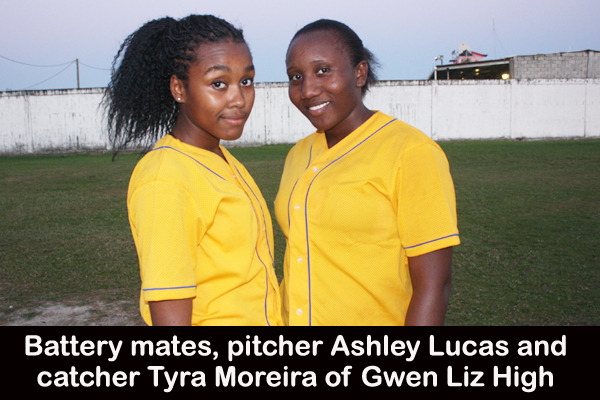 The Finals of the Central Secondary Schools Sports Association (CSSSA) softball tournament 2014 were held on Tuesday at Rogers Stadium, with the female championship game preceding the male championship match.

It was billed as a pitchers’ duel between Gwen Lizarraga High School’s Ashley Lucas of CODICADER fame and Amber Wade of Ladyville Technical High School; and indeed it was, with both young ladies giving their best effort in a keenly contested match that ended 5-3 in favor of Gwen Liz High. The fire-balling Ashley Lucas was supremely confident before the game, but was visibly rattled when Ladyville Tech took an early 2-0 lead in the first inning aided by some throwing errors. In the later innings, the speed of Ashley’s pitches kept the Ladyville Tech bats quiet, while Amber struggled with her control, walking in the go-ahead run in the top of the 5th, which ended 5-3 in favor of Gwen Liz. Ashley Lucas was the winning pitcher for Gwen Liz, while Amber Wade took the loss for Ladyville Tech.

In the nightcap male game, it was deadlocked at 4-4 after five innings. In the extra inning, SJC went ahead, 6-4, but, after a delay due to in an inning that had some controversy, Nazarene came up with 3 runs for the 7-6 victory. Winning pitcher for Nazarene High was Jerome Carr, while Dylan Snaggs got the loss for SJC.

According to a CSSSA release on Tuesday, “SJC has lodged a protest to the game based on the tie-breaker rule.” However, this afternoon, CSSSA president Deon Sutherland said the protest was unsuccessful.

Therefore, the results remain, and it will be Gwen Liz females and Nazarene High males representing the CSSSA at the NSSSA softball Nationals this weekend at Kings College.