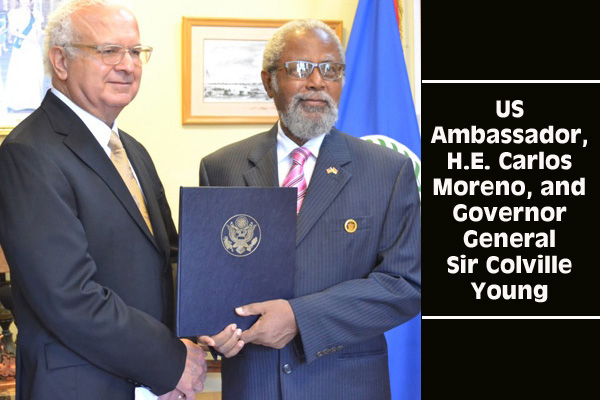 Ambassador says there is no LGBT agenda

Retired California judge Carlos Moreno, who arrived in Belize over the weekend, took over the United States’ Belize mission from Charge d’Affaires Margaret Hawthorne today, after he presented his letters of credence to the Governor General of Belize, Sir Colville Young, this morning at the Belize House in Belmopan.

In presenting his credentials, Ambassador Moreno expressed his desire to work with the Government of Belize on matters of mutual interest, issues relating to youth, culture, education, health and commerce.

He also said that there is great potential for continuing strong relations between the two countries.

Sir Young welcomed Ambassador Moreno and thanked him for his kind words of friendship and cooperation, and expressed particular interest in building relations as it relates to youth.

Moreno, whose roots originate in neighboring Mexico, has said that he will devote his time and energy to building cultural bridges and exchanges, and expanding business and trade opportunities.

Moreno, who issued a dissenting opinion in a California Supreme Court decision on the ban on same-sex marriage (also known as Proposition 8), told journalists in Belmopan today that, “from the perspective of the United States, there is no LGBT agenda.”

Moreno, who some deem to be pro-LGBT, said that, “The United States has its own constitution and laws, which I interpreted in the fashion that I saw fit, with a fidelity to the law that applied in the United States. I would not presume to apply the law or take a position on any matters that are based upon Belizean law. That certainly is not my province.”