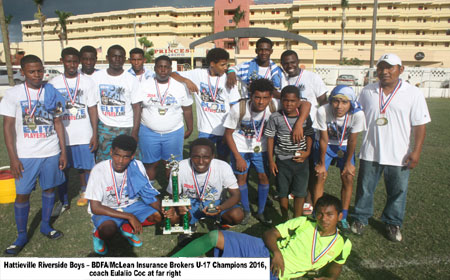 The tournament had suffered from a few breaks, first for the National U-17 in Belmopan in late August, then due to field availability problems following the start of the CYDP Peace Cup. An attempt was reportedly made to hold the playoffs at the ITVET (Old Technical) field; but this was rejected by the teams due to the abundance of limestone chips which is dangerous for the players. Eventually, an abbreviated one-day playoff round was held at the MCC on Monday, October 10, a holiday, with games played with 25 minute halves. They managed to complete the semifinals, and reach as far as the third-place game, where San Pedro prevailed over Brown Bombers. The final between Hattieville Riverside Boyz and Young Warriors FC was then put on hold, until yesterday.

There is a bundle of football talent, without a doubt, in the Belize District, despite the fact that no Belize City youth reportedly travelled to Valladolid, Mexico, with the National U-17 recently.

Some sources opine that the BDFA is dropping the ball where the proper organization of tournaments and looking after the welfare of young players is concerned.

The McLean Insurance Brokers U-17 championship game was played with 30-minute halves yesterday. Hattieville Riverside Boyz were victorious, 2-1, with first half goals from Richard Hines and Jadon McGregor. They also failed to convert a penalty in second half, which was kicked over the goal by Mario Rivera. Kyle Samuels scored the only goal for Young Warriors, who had a good second half, and may have fared better with a full 45-45.

We were very impressed with Hattieville forward Richard Hines and goalkeeper Jason Cho; and also with forward Kenroy Linares of Young Warriors.

In other football news, which we confess a lack of enthusiasm for (We would much prefer hearing about a U-15 or U-13 or even a 1st Division Closing Season), the BDFA today announced the start of its BDFA Inter-Office Competition this Thursday at the MCC Grounds.