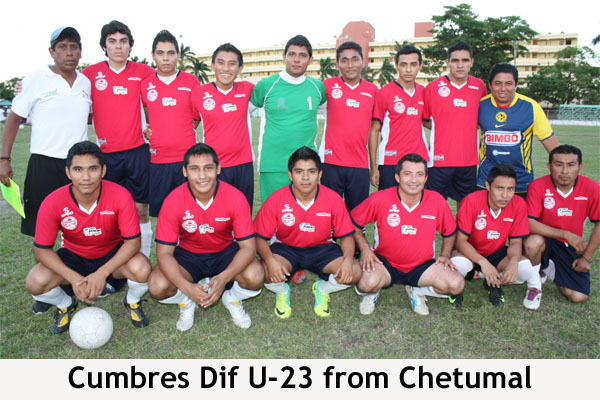 The visiting Cumbres Dif club from Chetumal, Mexico, brought U-17 and U-23 teams, under coach Eduardo Cabrera, to play against HUYSC U-17 and the Hattieville Monarchs squad, respectively. According to a member of their coaching staff, the Dif U-17 is the 3rd Division amateur champs of Chetumal; and the other team is a U-23 amateur selection from Chetumal.
In the first game, despite well orchestrated team play on the part of the visitors, they were overcome by the speed and athleticism of the HUYSC U-17 players, who prevailed, 4-2, with John King and Devaughn Zuniga netting 2 goals apiece for Hattieville. (Yes, that is the same John King who would play for F.C. Belize on Sunday in the PLB game against Belmopan Bandits.)

It was a similar outcome in the U-23 game, although Club Dif took a 1-nil lead into half-time. The visitors showed some good passes, but the speed and individual talent of Hattieville Monarchs eventually prevailed, and it ended 3-1 in favor of the Monarchs, with Faisal Ahmad netting twice and Ralph Spain once for the winners.