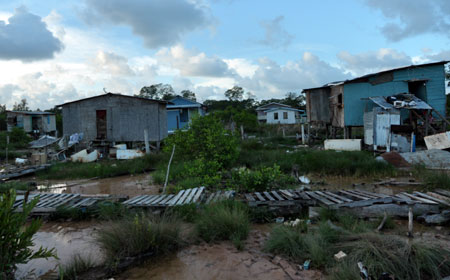 BELIZE CITY, Thurs. Apr. 9, 2015–A group of Holy Emmanuel Street residents, who are once again in danger of being displaced by the proposed development of the area near to the Chetumal Street Bridge, are trying to make their voices heard by speaking out against the latest prospect of land eviction.

Amandala understands that a few weeks ago, Jia Wei Li, an Asian businessman, sent a representative along with police officers to the area to inform over a dozen families who reside in the vicinity of the strip cleared for access to the bridge that they must vacate their homes by April 15 or face eviction.

Today, a few of those affected families decided to alert the media of the situation because they understand that they will eventually have to move because the new land owner reportedly has a legitimate title, but they believe that they are being pushed around by authorities who promised to assist them to find an alternative place to live.

We spoke to Consuelo Urbina, who told us that they have been trying to contact their area representative, Hon. Mark King, in order to be relocated and compensated for the properties that they have occupied, but to no avail.

She said, “We’re not mad because the Asian man bought the place, but we need help because we have many families and children who will be affected, and he promised to help us from two weeks ago, but we have not heard from him since.”

Another one of the residents said that on March 18, King instructed them to create a petition letter and take it to his office, but since time is now running out, many of them have now become apprehensive, in fear of being homeless.

“The [Asian] man offered us $1,000 each in compensation for the land that we occupy, and we are concerned because we have up to the 15th of this month to take the offer, but we can’t do anything with $1,000. We are living here for more than 5 to 6 years, and others for up to 10 years. We are not arguing with the authorities; we are pleading to them, especially our area representative, to please compensate us with another piece of land somewhere else, because we are poor Belizeans who don’t have anywhere else to go”, she explained.

Two weeks ago, when Lands Commissioner Wilbert Vallejos was questioned about how a private landowner acquired what we are told is at least some 6 acres within city limits, he replied that he was not aware of the particular situation.

Sources told us that Government might not be fully aware of the details of the deal because it was sold to Wei Li by a private landowner.

A copy of the title held by Jia Wei Li, whose address is cited as Central American Boulevard in Belize City, shows that he received his land certificate on November 5, 2013.

In June 2011, police were called out to disperse a group of squatters from the same area who had been vigorously demonstrating on the Belcan Bridge in Belize City about a similar prospect of eviction from the land on which they lived.