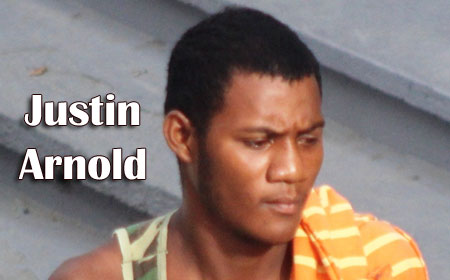 BELIZE CITY, Fri. Aug. 19, 2016–On Wednesday, August 10, Chief Justice Kenneth Benjamin ruled that Section 53 of the Belize Criminal Code, which makes sodomy an offense, is unconstitutional. The ruling has been hailed as a victory for the LGBT (Lesbians, Gays, Bi-sexual and Transgender) community.

Arnold allegedly slapped Garcia, and Garcia went to the police station and made a report about the incident.

Since there was no objection to bail, Magistrate Mendoza offered Arnold bail of $500 plus one surety of the same amount.

Arnold, however, was unable to post bail and so he was still in police custody at the end of the court’s business day.

In his report to police, Garcia said that on Wednesday, August 17, at about 9:00 p.m., at their home at 5 North Front Street, he and Arnold were having supper and Arnold asked him to assist him in pulling down a door.

Garcia said that when he told Arnold he was too tired to assist him, Arnold remarked, “I wah deal with you later,” and that is when he (Arnold) slapped him on the left side of his face, causing him to feel pain, and fearing for his life, he requested court action against Arnold.

Police arrested Justin Arnold and charged him with common assault.