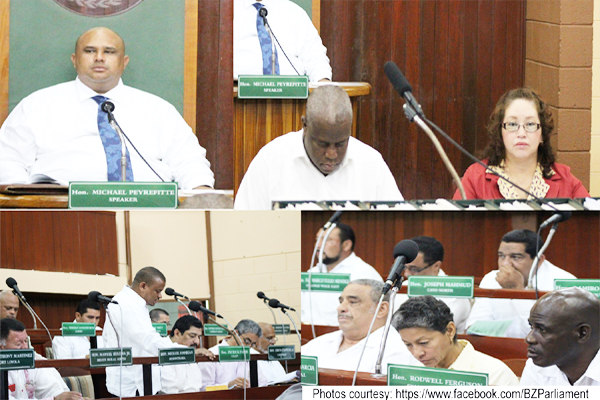 In introducing the bill, Barrow said that “this is a great day”

The House of Representatives today approved two money motions with an aggregate value of $41.2 million, as well as a new bill dubbed the Mutual Administrative Assistance in Tax Matters Bill, 2014, which Parliament said is intended to give effect to the Convention on Mutual Administrative Assistance in Tax Matters, which Belize signed and brought into force back in 2013.

At today’s House meeting, Prime Minister and Minister of Finance and Economic Development Dean Barrow tabled two loan motions: a guarantee motion for a US$11,231,000 loan from the Caribbean Development Bank (CDB) for the Belize Electricity Limited’s (BEL) Sixth Power Project; and a motion for the approval of a BZ$20 million line of credit from the Social Security Board (SSB) to the Development Finance Corporation.

Barrow said that the loan will allow BEL to upgrade and expand its sub-transmission and distribution systems across the country with a view to improving the reliability of BEL’s power supply to customers.

The US$11,231,000 loan is to be repaid in 48 quarterly installments starting 3 years after the agreement date at 4.1% per annum with a commitment fee of 1% per annum, to be paid quarterly on the amount of the loan withdrawn.

The SSB loan motion explained that “the Social Security Board (SSB) has offered to lend to the DFC the sum of BZ$20 million to enable the DFC to on-lend to various sectors of the Belizean economy, namely, productive, micro, small and medium enterprises.”

That loan is for 14 years, inclusive of the 2-year grace period, with quarterly repayments at a rate of 5½% and a 1% commitment fee.

In introducing the bill, Barrow said that “this is a great day,” as the funds are being obtained for on-lending to small and medium enterprises, which is at the core of the DFC’s mandate.

He said that Government had been told by the international finance institutions (IFIs) that it ought not to even attempt to resuscitate the DFC. The Government, he said, nevertheless went to the CDB for $20 mil to restart the DFC and since that time “the DFC has been going great guns.”

Upon the introduction of the money bills, the Opposition Leader, Hon. Francis Fonseca, raised concerns over the need for further electrification in parts of rural Belize which are still not connected to the national grid. Barrow said that expansion works, financed by the Government of Belize and not by BEL, would continue.

Apart from the loan motions and the mutual legal assistance bill, two more bills were introduced, but they were not passed. They were the Insurance (Amendment) (No.2) Bill, 2014, and Gaming Control (Amendment) Bill, 2014.

The House Committee which has been tasked with reviewing those bills will host an open meeting at 10:00 a.m. on Monday, June 30, 2014, at the Committee Room, National Assembly, Belmopan.