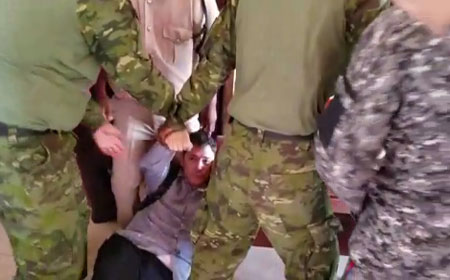 BELMOPAN, Fri. Aug. 26, 2016–The culture of disrespect in the House of Representatives has been around for a long time, but it has never resulted in police being ordered to eject a member of the House who was named by the Speaker in post-independent Belize until today when House Speaker Michael Peyrefitte suspended the Opposition People’s United Party (PUP) Cayo South area representative Hon. Julius Espat after the Pickstock area representative and Minister of Foreign Affairs, Hon. Wilfred “Sedi” Elrington, presented the motion to name him.

Hon. Espat, however, refused to leave his seat. Police, in carrying out the order of the Speaker, first cleared the galleries of the House—even putting out members of the media, before they literally dragged Espat out the Chamber of the House of Representatives, with him resisting every inch of the way, as the other members of his party walked out in solidarity, ending the sitting of the House in a controversial way.

The incident was one of those made for television episodes, but the police also cleared media representatives from the gallery, with the obvious intention of preventing them from capturing footage of them manhandling Espat.

The tactic by police did not work, however, because although the media had been cleared out before the ugly first-time incident unfolded, it was nonetheless captured on cell phones that Opposition area representatives had, and the footage made it into the television stations’ evening newscasts.

The tension in the House began to build when Hon. Espat, who has served as the Chairman of the House’s Public Accounts Committee, rose to speak about some of the findings in the recently released, explosive Auditor General’s Report on irregularities in the Immigration Department. The Cayo South area representative insisted that what he wanted to address was good governance.

Things between the Speaker and Espat began to get testy when the Speaker cautioned Espat to not delay in showing how his remarks were relevant to the matters before the House of Representatives. When asked by Espat to specify the rules of the Standing Orders that were the basis for the Speaker’s comments, Peyrefitte responded, “I don’t have the time to read the whole thing for you…”

Hon. Espat responded: “You have to have the time; the people pay you to listen to us. When you have the Prime Minister insulting this gentleman [another Opposition area representative] by name, and you are giving them opportunities to do that, and I am talking about good governance, what is your problem, Mister Speaker?”

The Speaker replied: “The problem is they pay me to ensure that you do your job and that is impossible.”

Hon. Espat then retorted, “They pay you to block me; that’s what they pay you for.”

At the Speaker’s request that Espat be named, Hon. Espat exploded: “This goddamn House of Representatives is a joke. You are a mercenary of that government. It is ridiculous that a member of the House cannot speak about good governance in this country. Dah thief unu got over there; thieves. There is nothing that I have done that is illegal or against the orders of this House. Let them raise their hands. Bring it on. Mister Speaker, the reason that you don’t want me to debate is because I am bringing up issues that the Auditor General has put in her report.”

At this point, two senior members of the House, Hon. Said Musa (PUP) and Hon. Michael Finnegan, tried to get the Speaker to reconsider his position and for he and Espat to act civil to each other, but to no avail.

Hon. Espat attempted to apologize, but the Speaker did not want to hear it.

Speaker Peyrefitte interrupted the attempt by saying, “Member for Cayo South, I do not want to hear you.”

“Mister Speaker, then I will not withdraw my statement; then it is a fact,” Hon. Espat then declared.

Hon. Elrington then volunteered to carry out the Speaker’s request and presented the motion for suspension of Espat, and Hon. Espat was named, but for how long he has been suspended, it is not yet known.

The suspension of Hon. Espat, however, has been commented on by the former PUP Senator Lisa Shoman, an attorney, who wrote on her Facebook page, “This is what Julius Espat was accusing the Speaker of yesterday, with his inflammatory language — accusing that worthy of being paid to ‘block’ him. But does the accusation rise to the penalty of suspension or naming?

“Suspending a member is a serious matter. Section 44(3) states, ‘The Speaker or the Chairman shall order any Member to withdraw immediately from the House during the remainder of the day’s sitting and may direct such steps to be taken, as are required to enforce such order— (a) (b) where the conduct of such Member is grossly disorderly; or where such Member has used objectionable, abusive, insulting or offensive words or language or un-parliamentary expressions, and, on being called to order, has refused to withdraw such words or language or expressions, and has not offered an apology for the use thereof to the satisfaction of the House.

“We all watched the conduct of Hon. Espat in the House Chamber. He may have used objectionable language, but he did offer to withdraw and apologize, but the Speaker stated clearly that the Member would NOT be heard.”

“Instead, the Speaker point-blank refused to hear Espat, and begged for several minutes for a Minister to ‘name’ Espat and then for a motion to suspend him,” Shoman further wrote.

“The bar is high on suspension or naming, both of which are extreme measures, since both muzzle the guaranteed freedom of speech of a Parliamentarian.

“Read the standing orders. The statement of Julius, no matter if it WAS rude, did NOT rise to the level of naming OR suspension,” Shoman opined.

Before police dragged out Espat, they attempted to muzzle the media by chasing out, and in some cases, manhandling media personnel (including 7News’ Jules Vasquez) from out of the House of Representatives. The objective clearly was to prevent the recording of video footage by the media of Espat’s forcible removal.