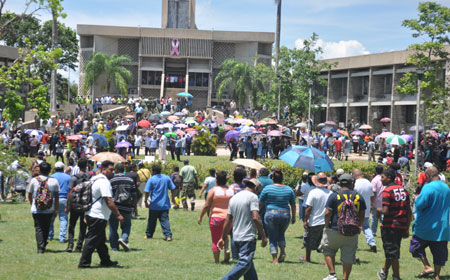 BELMOPAN, Cayo District, Fri. Aug. 26, 2016–“I want my country back,” “leave 53,” and “Barrow have to go,” were among the statements being chanted by the approximately 2,000 protesters who turned up this morning at the footsteps of the National Assembly building during today’s House of Representatives meeting/

The protest was the result of a collaboration between the churches and unions, as well as the activist group Citizens Organized for Liberty through Action (COLA), the “I want my country back” movement and the Poor People Organization for a Healthy and Righteous Society (PPOHRS), who say they are not in support of the Chief Justice’s recent ruling on Section 53 of the criminal code and the corruption highlighted in the recent Auditor General’s report.

Commenting on that ruling, Giovanni Brackett of COLA said, “We do not support the changing of the sodomy laws in Belize. We don’t believe that the government should allow one percent of our society to dictate the morals of an entire nation; this government is not a government of the majority, but of the minority.”

Brackett, speaking on the recent Auditor General’s report, said, “The question should be, which one of the UDP [ministers] is not implicated…it is very nasty, it is the worst scandal that I have seen in the history of this nation.”

Luke Palacio, BNTU National President, told Amandala that the recent ruling on Section 53 will present a dilemma for teachers nationally, because, he explained, “We as teachers are particularly concerned because what this ruling has done, it has left the door opened to many questions and we will have to be the persons charged with the responsibility to try and explain this to our children.”

Pastor Louis Wade, the host of Plus TV’s Rise and Shine morning show and a loud voice in the outcry in the overturning of the sodomy law, remarked, “Today, we are showing the country that Section 53 is not just a church issue; you see, it’s a strategy of the LGBT to call homosexuality a church issue.”

Wade additionally commented, “We have a government by one man, we have a dictatorship, in my opinion and the entire Cabinet is corrupt to the core.”

According to PPHORS founder, Raymond Rivers, he attended the protest, for the sake of the future of the nation’s poorest children, whose future he believes is what a billion-dollar homosexual movement wants to decide.

At its peak, the crowd, swollen to almost 2,000, registered its displeasure in unison by belting out their chants to the rhythmic vibrations of Garifuna drums.

Then reputed Southside Gang leader Wababa Noralez, took the stand and announced the need for a shift in focus from crime to governance. He stated that there would be no more gang violence among dispossessed ghetto youth, and that instead, attention would be given to the corruption of this current UDP government.

Noralez told the crowd, “You might not know me. They consider me as a gang leader from Belize City, but I am an educated person and I just grew up in a community whereby the black poor people, especially the males, are stereotyped for being violent, irrational, uneducated poor people weh nuh mean nothing to the country.”

By midday, the crowd had grown restless and Raymond Rivers jumped over the police barrier and attempted to make a run into the House of National Assembly, but was flung down by police, who later called in backup officers to man the barricades.

Rivers returned into the crowd, where a second attempt was made. However, this time he was not alone, as several protesters ran through the broken barrier and attempted to enter the House meeting, but were stopped after police fired a warning shot into the air.

The permit to protest was revoked shortly after midday when a rock was hurled from the crowd at an officer on duty. The crowd erupted and police pursued Johan Okeke, who was among the men that fled from the crowd.

Okeke had gone to Belmopan in a bus of 32 of Hon. Patrick Faber’s supporters who had left from Collet to support their Deputy Party Leader. According to spectators, he was not the one responsible for throwing the rock at the officer but nevertheless, he was manhandled and taken into custody.

According to the supporters of today’s protest, another protest is being organized for Tuesday during the usual Cabinet meeting.