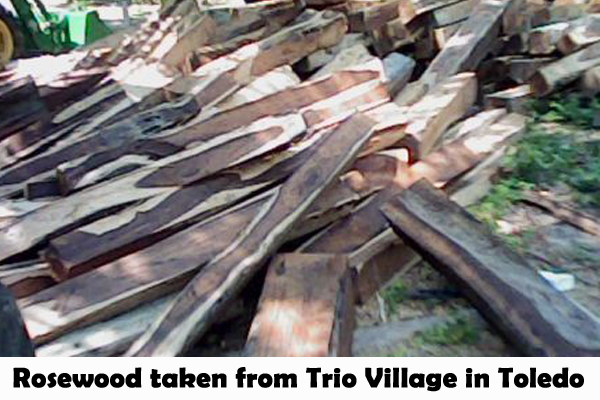 While today is being proclaimed as the International Day of Forests across the globe, there are credible reports that our lush forests in the deep south of the country are still being pillaged and our valuable rosewood stock is continuously being depleted, even after a moratorium was passed in February of 2012.

According to the United Nations General Assembly, the purpose of the day is for nations to celebrate, and bring awareness to the issues relating to, the world’s forests while undertaking local, national and international efforts to organize activities involving forests and trees.

At the same time, residents from the Toledo district have been complaining about an increase in activity in the cutting and shipping of rosewood out of the district over the last few days.

One rosewood exporter, however, American national Charles Sellers, who has a concession to log in the Maya Mountain north forest reserve, told the media that he had a quantity of the coveted lumber in the Trio Village area of Toledo which was stolen, allegedly by villagers, and sold to a Belmopan-based company called Edison B International Trading – who also has an export permit for amnesty rosewood.

For its part, the Forestry Department has stated that they decided to allow the movement of the material by Edison B International Trading after determining whether the rosewood was legitimately procured.

Although the department has said that Sellers cannot prove that the rosewood in question is his property, Sellers claimed that the logs carry the brand of his company, and is now trying to confiscate the container of rosewood from the buyers, who are supposedly three Chinese nationals.

Amandala spoke with well-known Toledo resident, Wil Maheia, and he told us that the authorities need to put more effort into the policing of our forests and natural reserves, especially since there has been a spike in illegal harvesting activities within the Toledo District since the start of the annual dry season.

He explained that the illegal, wholesale pillaging of rosewood in southern Belize continues unchecked and uncensored despite the moratorium, even adding that some forest rangers working for SATIIM intercepted a number of rosewood flitches inside the Sarstoon Temash National Park a few weeks ago, and now another container full of rosewood has been cut and shipped out of the district.

The concerned community member stressed that they have repeatedly tried to inform the Forest Department of the recurring activities, however forest officials have not responded accordingly, leaving them to believe that the laws regarding rosewood are being blatantly disregarded by the people who are involved in rosewood exportation.

Amandala understands that the value of the rosewood that was plundered cannot be appraised because the quantity is undetermined.

We attempted to get in contact with Chief Forest Officer, Wilbur Sabido; however, he was not available at the time.