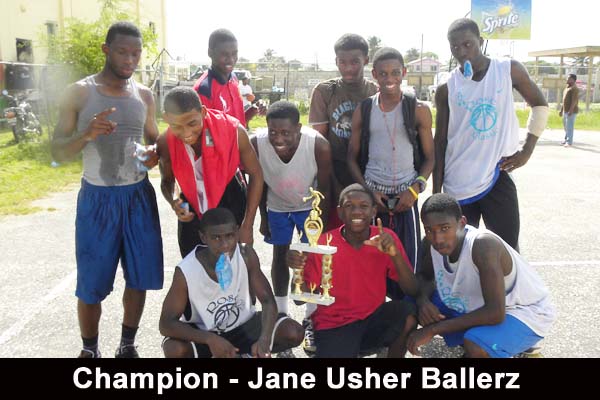 The tournament tipped off on July 30 with a total of 8 teams that were divided into two groups, Group A and Group B. Four teams advanced to the knockout round that began on Wednesday, August 7, whereby the #1 ranked team from Group A played the #2 ranked team from Group B, and #1 from Group B played #2 from Group A. In the first game, Complex Unruly Ballerz defeated Rising Starz, 51-47, to advance to the finals; while in the second game, Jane Usher Ballerz beat Freedom Street Ballerz, 47-39, to qualify for the other spot in the finals.

After an exciting and energetic game between the two finalists today, Jane Usher Ballerz defeated the Complex Unruly Ballerz, 63-55, to take the championship. Albert Longsworth from Jane Usher Ballerz led all scorers with 20 points (pts), 3 rebounds (rebs) and 3 steals (stls). He was named MVP of the tournament based on his performance in the games as well as his leadership skills and discipline on and off the court. Akeem Richardson, also of Jane Usher Ballerz, scored 12 pts, made 10 rebs and got 8 stls to help secure the win. Meanwhile, for Compex Unruly Ballerz, Francis Arana contributed 17 pts 4 stls 4 assists and Alejandro Baptist 18 pts 6 rebs.

We thank CYDP for assistance with this information.