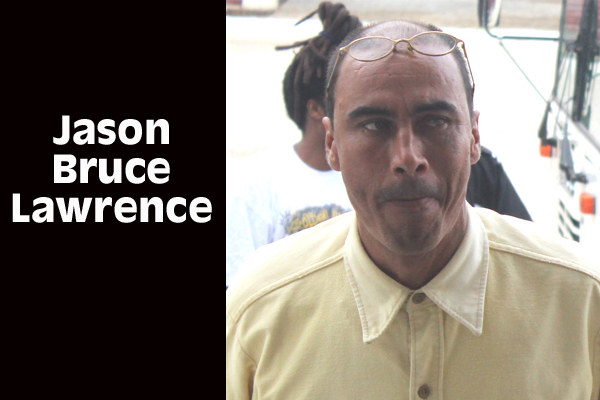 Jealous, it was revealed, led him to murder his wife

A jury of seven women and five men deliberated for a little under four hours before returning to the courtroom of Supreme Court Justice John “Troadio” Gonzalez to announce a unanimous guilty verdict in the murder trial of Jason Bruce Lawrence.

Lawrence, 39, was indicted for the December 4, 2009, murder of his common-law wife, Nurse Mercedes Carillo, 40, who died after being stabbed multiple times in the couple’s Burrell Boom home.

The stabbing allegedly occurred in front of Carillo’s two teenage children, who reportedly begged Lawrence to take their injured mother to the hospital after he had stabbed her five times in a jealous rage.

Carillo’s two children, Diana and Christopher Carillo, at the time of the incident, 18 and 14, respectively, testified in the trial.

According to them, on the night their mother was fatally stabbed, a fight broke out between Lawrence and their mother around 12:00 midnight.

Diana said she heard noise coming from her mother’s bedroom, and she and her brother ran into the bedroom and saw Lawrence beating their mother.

According to Diana, she yelled out to Lawrence to stop beating her mother, and she heard her mother say, “Stop beat me, ah done stop call am.”

She was referring to her calling another person, a man.

Diana said that at that point, she picked up the phone and called the police.

Diana testified that after she called the police, Lawrence left the house for about an hour and then returned.

But when Lawrence returned, the front door to the house was locked and he stoned it with an object, breaking one of the panels to gain entry.

Upon entering the house, Lawrence met Mercedes at the front door. And he began to cursing her out.

According to the children, their stepfather pulled out a knife which was in his right pants waist and stabbed their mother five times.

Christopher Carillo, who was 14 at the time of the incident, tried to aid his mother by hitting Lawrence in his back with a guitar.

Diana also tried to defend their mother. She grabbed a knife and stabbed Lawrence in his shoulder.

After witnessing the stabbing of their mother, the children somehow managed to convince Lawrence to take Diana to the hospital.

But about 20 minutes after she was taken to the KHMH, Carillo succumbed to her injuries.

Dr. Hugh Sanchez, who performed the post-mortem, concluded that Nurse Carillo died from hypervolemic shock due to stab wounds to the liver and spleen.

Thompson told the court that Lawrence visited his home, in Burrell Boom, and he told him (Lawrence) to calm down and go to sleep in one of his rooms for the night.

But when Thompson woke up, Lawrence had gone back home to Carillo’s house.

In his defense, Lawrence, who was represented by attorney Oscar Selgado, gave a dock statement in which he admitted that he and Carillo had a fight. Lawrence said that he went to the room and lit a candle, and that was when he saw a knife.

According to Lawrence, he prayed in the room for 30 minutes, but he just didn’t get through to God and that the Devil got the best of him.

When he went back to Carillo’s house, she told him that the police were coming. According to Lawrence, that’s when he stabbed her.

The trial began on Monday, May 19, 2014. The case was prosecuted by Crown Counsel Leroy Banner, who called a total of 8 witnesses before closing his case on Tuesday evening.

During the address, which took place on Monday, the attorney for the accused told the jurors to find his client, Lawrence, guilty of manslaughter and not murder, as he acted in jealousy.

He did not mean to kill his girlfriend, said Selgado, because at the time he stabbed her multiple times, he was under the influence of crack cocaine and he was drunk.

Prosecutor Banner told the court that there was no way that Lawrence was provoked. Even if he was provoked, Banner argued, that provocation went through the door after he left the house for an hour and came back armed with a knife.