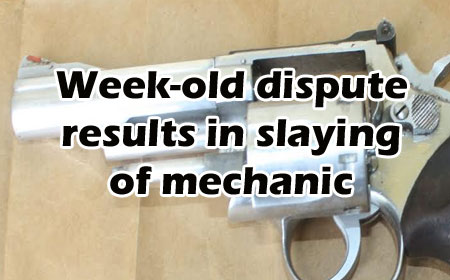 BELIZE CITY–A mechanic who resided in Southside Belize City was cut down in a hail of bullets yesterday morning while reportedly sitting with a few of his colleagues on an old refrigerator on the street side in front of his home at #9 Neal Pen Road.

At approximately 9:55 a.m., two dark-complexioned men on a motorcycle who were both wearing helmets, drove up and stopped in front of Jason Paul Paulino, 38, after which the passenger on the bike allegedly took out a pistol and unleashed a barrage of gunshots in Paulino’s direction.

According to police, Paulino attempted to flee, but fell in the process, and that was when the gunman got off the motorcycle, approached a wounded Paulino, stood over him, and callously shot him several more times.

He was transported to the Karl Heusner Memorial Hospital, where he was admitted to ward in a critical condition, but he died about an hour later.

Today, Superintendent Hilberto Romero, the Officer in Charge of the Eastern Division Crimes Investigation Branch (CIB), told us that several persons have been detained for the incident and that statements from eyewitnesses are being recorded. No one, however, has been charged as yet for the vicious murder.

While his relatives have declined to speak with the media, friends who were at the scene of the shooting yesterday told us that Paulino was a calm individual who did not trouble anyone and always had a smile.

They said that they do not know who would want to target him, but according to Supt. Romero, initial investigations have revealed that the victim had recently been involved in a misunderstanding, probably a week ago, which could quite possibly have been the cause of his demise.

“The information we have gathered so far is that he was involved in a misunderstanding with some persons a week ago, and that was what resulted in that shooting. We do not believe that it [the murder] is gang-related”, Romero stated.

BELIZE CITY, Mon. Jan. 18, 2021-- For the first time in Belize’s history, the launch of a new year of proceedings at the Supreme...
Read more
- Advertisment -