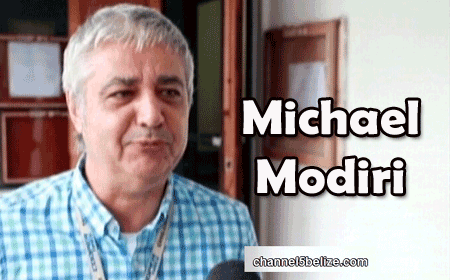 BELIZE CITY, Thurs. Apr. 7, 2016–The land dispute between Michael Modiri, 57, an Iranian businessman, and Bradley Paumen, xx, an American investor and tour operator, has been playing out in the Supreme Court in civil claims which just ended this week, but there is also a dark side of what transpired between the two neighbors for which criminal proceedings have been initiated by the state against Paumen and three others over a purported plot to murder four individuals, Modiri included.

Paumen has been charged with four counts of abetment to murder as well as perversion of justice and conspiracy to pervert justice. He is facing the charges with three other accused persons, two of whom are his employees. They were all released on Supreme Court bail.

On Tuesday, Supreme Court Justice Shona Griffith issued another court ruling in Modiri’s favor, this time awarding him $150,000 as compensation for the trespass on his land, which has been used for commercial purposes, and another $150,000 as exemplary damages. The awards were issued against Bradley Paumen and his two companies.

Tuesday’s court victory comes on the heels of last year’s declaration by Madam Justice Sonya Young that the government was in violation of the acquisition law when it acquired Modiri’s property, purportedly for a public purpose. In the opening lines to her judgment, Justice Young wrote: “This is a strange tale of a man’s property being bulldozed and cleared into a road without his permission. A road which he says leads in one direction, to the business of a private entity. And in the other, to the private property of the owner of the said private entity, where there is a locked and guarded gate.”

The court did not agree with the stated purpose of the acquisition, and the judgment ended with a writ of certiorari quashing the Minister’s acquisition decision.

Modiri’s attorney, Nazira Uc Myles, who works out of the law firm of M.H. Chebat & Co., told Amandala today that Justice Griffith will deliver the written judgment in the claim in the next seven days.

Myles explained that the judicial review, which basically invalidated the government’s acquisition of Modiri’s property, was filed before the case that concluded on Tuesday.

Myles said the case was against Paumen and his two companies, Sibun Grain and Cattle Limited and Dark Night and Daylight Cave Tube Adventures, and the Government of Belize.

“Government compulsorily acquired the property on February 28, 2015, and the judicial review that quashed the acquisition was made at the end of May,” Myles said.

Myles said they brought judicial review saying that the acquisition was not done for a public purpose, and that it was not done in accordance with the acquisition law. “No notice was given to our client and there was no negotiation to compensate him, and this was all admitted by Mr. Vallejos (the Commissioner of Lands) during cross-examination,” he said.

“The court had found that as soon as you cross over the bridge in the Frank’s Eddy area, you meet up to a security gate that is controlled by Mr. Paumen. No public can pass there unless he gives permission. So the court found that it was not for a public purpose”, Myles explained.

Myles said the judicial review came about as a result of an action that the government had taken while this case was going on.

Myles explained that Modiri had approached the court to grant him an easement of necessity, explaining to the court that passing through Mr. Paumen’s property is the only way he can reach his property.

“We brought expert testimony from Mr. Kenneth Gillett, a surveyor, and we also submitted a memo from the Ministry of Natural Resources principal planner, Ms. Gina Young, who had recommended the same thing that Mr. Gillett had recommended, that this portion be acquired for a public purpose so Mr. Modiri can reach his property. So, the Ministry of Natural Resources did not follow their own expert’s advice. But the judge said she did not see that as a necessity; however, she ruled in our favor in the essential part of the case, that Mr. Paumen and his companies have been trespassing since 2013, and that he illegally built this road that he is using,” said Myles.

Myles said that Paumen had not been stopped by police, despite Modiri’s attempt to have this done. There were injunctions in place and he would repeatedly disobey the injunctions, she said.

“In court I asked him why he continues to conduct this trespass, and he answered me and said that it’s a political figure who gave him permission to do so. He said that it’s Mr. Ralph Haung, the UDP standard bearer for Cayo South, who gave him a letter that he can continue to do so. Up to today, he has not stopped. The judgment is like a permanent injunction. He must stop. Otherwise he can be criminally charged,” Myles pointed out. “And contempt proceedings can be brought against him.”

Myles said that her client has been living in fear ever since he learned that there was a plot to murder him, that he had been marked for death.

Modiri told Amandala that the judge showed a lot of courage in the way she ruled in the case.

Amandala asked Modiri how he feels about the fact that Paumen is now facing criminal charges for allegedly threatening his life.

Modiri said he doesn’t understand how Paumen could be out on bail. He said his first bail should have been cancelled, but not only was the first one not cancelled, but a second one was granted.

Modiri explained that Paumen had never stopped the trespassing on his land, even “after we took the injunction to the Belmopan police. I put a chain lock and an iron gate. He would cut the lock to enter. Eventually, he removed the gate. “

Do you think that he will abide by this new decision of the court, Amandala asked Modiri.

“I seriously doubt it,” Modiri replied. “If I don’t get any help from the police or some enforcement authority…I contacted the man who built the first iron gate, but he told me, no, I don’t want to go back there. I don’t want to get hurt,” Modiri said.

“I will have to find a legal way to stop him,” Modiri said, as he described Paumen’s behavior to that of a terrorist.